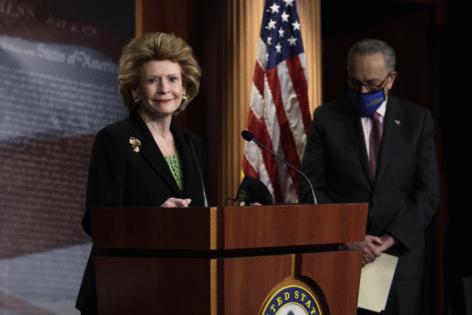 U.S. Sens. Gary Peters and Debbie Stabenow with 10 Democratic colleagues wrote a letter dated Wednesday to Transportation Secretary Pete Buttigieg, requesting information on the actions the department is taking for the advancement of autonomous vehicles.

The senators emphasized the need for the technology to make roadways safer and more accessible, while staying ahead of countries like China in its development. They said self-driving vehicles represent opportunities for different jobs in manufacturing as well as in logistics, transit and passenger transportation.

"Yet, we lag behind in shaping a regulatory framework that will foster this innovation," the Michigan Democrats and their colleagues wrote, "while simultaneously protecting and encouraging all of the important benefits we believe autonomous vehicles are capable of delivering."

The senators requested information on specific actions the department is taking in the near term, which authorities will oversee the development and manufacturing of autonomous vehicles, how it will consider the jobs impact in its development of transportation policy, its plans for modernizing federal safety standards to account for self-driving vehicles, and what data are needed to create those benchmarks.

The letter seeks information on how the department is evaluating manufacturers' requests for exemptions from current standards to deploy autonomous vehicles and how it is communicating the procedures and timeline to those stakeholders. It also seeks clarity on the involvement of state and local governments that will have to address federal policies in their territories for licensing, liability and related matters.

The members of Congress wrote that the increase in U.S. roadway deaths shows a pressing need for the technology that removes human-impaired driving. Roadway deaths rose 12% in the first nine months of 2021 compared to the same period in 2020.

"This is a trend in the wrong direction," they wrote. "With an appropriate regulatory framework, autonomous vehicles have the potential to help reduce deaths and injuries from crashes."

The senators added AVs can provide mobility solutions for people with disabilities and reduce the need for parking.

"None of these benefits can be taken for granted; nor can we assume the United States will remain a leader in this arena," the senators wrote. "Our competitors on the global stage — particularly the Chinese government — have significantly invested in autonomous and connected vehicle technologies. That's why securing the benefits associated with autonomous vehicles while lifting up our communities and workers will require a nuanced — and proactive — approach to policymaking."

A development authority east of Atlanta has voted to approve an "economic development agreement" for the planned $5 billion Rivian factory, outlining terms with the electric vehicle company, including environmental ...Read More