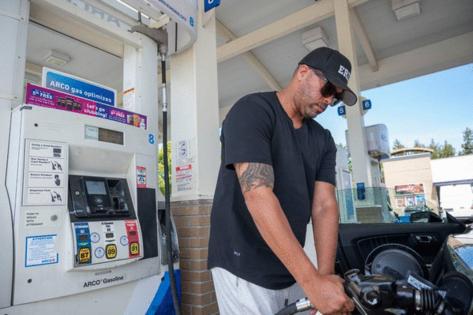 That makes her one of millions of Californians who don’t make enough to pay income taxes. It also excludes her from the state’s new inflation relief — one-time payments of $200 to $1,050 that will go to households earning as much as $500,000 annually.

This makes no sense, Carr said.

Relief and stimulus programs use the state’s Franchise Tax Board to distribute money, and the agency doesn’t have have non-filers like Carr in its system. It’s why they also missed out on California’s Golden State Stimulus Program last year.

Senate President Pro Tem Toni Atkins, D-San Diego, and Assembly Speaker Anthony Rendon, D-Lakewood, wanted to address the inequity this time, but didn’t. They said making the necessary changes would have led to unacceptable delays in distributing the money.

It doesn’t sit well with with Lynne Lickey, 78, of Placer County.

“We make less than $50,000 but because we didn’t file taxes we don’t get it and it just irritates the blank out of me that our friends that make a whole lot more money are going to get it and we sit here and will not,” Lickey said.

However, some Californians who don’t need to file do so anyway to take advantage of tax credit programs for low income residents. These include the earned income tax credit and the young child tax credit, said Sara Kimberlin, senior policy analyst for the California Budget and Policy Center.

“There are a number of people (with) low incomes who do file taxes who will be getting the payments, so that’s a positive thing,” Kimberlin said.

The inflation relief package, passed by the legislature and signed by Gov. Gavin Newsom on June 30, was the result of hard-fought negotiations. Each side had different ideas about who should get the money and how.

Newsom wanted to use the Department of Motor Vehicles to send $400 to vehicle owners, capped at $800 for up to two cars.

Atkins and Rendon pushed for the tax system to provide income-limited relief payments for those earning up to $250,000.

Legislative leaders also suggested increasing grant payments for residents enrolled in CalWORKS, the state’s welfare program for families with children, and Supplemental Security Income recipients, who are 65 and older or disabled.

In addition, they proposed finding a way to include people left out of the refund and the grant increases to apply for a rebate, according to the Assembly budget floor report.

The final budget does provide other forms of relief for low-income Californians, but no refund checks for those who didn’t file tax returns.

It will give CalWorks recipients more money for two years and will move up a planned SSI increase from January 2024 to January 2023.

But what happened to legislative leaders’ plan to allow residents to apply for rebates?

The federal government’s COVID-19 economic impact payment program — which distributed stimulus funds in 2020 and 2021 — allowed people who don’t file federal taxes to submit information to the IRS so they could receive the money.

But there’s no existing system that allows non-filing Californians to submit their information to the FTB. Creating one would take at least a year, said H.D. Palmer, a Department of Finance adviser and spokesman.

“It was determined that there would not be time to stand up a new state system that would be able to verify state eligibility and still meet the agreed-upon goal of issuing payments as swiftly as possible,” Palmer said.

“It was a goal of the Speaker to provide payments to non-filers,” said Katie Talbot, Rendon’s spokeswoman. “But ultimately in our budget negotiations we couldn’t figure out a way to develop a fast and secure method to get funds to most non-filers.”

Atkins said the final relief program is intended “to ease the burden felt by the vast majority of Californians and ensure that those who have the least, get the most.”

Seniors ‘disappointed’ they won’t get relief

Residents left out of the inflation relief program — especially seniors living on fixed incomes — are angry and disappointed at being repeatedly denied refund payments.

Eureka resident Caren Spencer, 76, earns $2,200 a month or $26,000 a year solely from her Social Security income — her only taxable income — and she doesn’t meet the minimum required to file taxes. So when she learned that would be the reason she wouldn’t qualify for California’s latest stimulus check, she said she felt excluded.

“Everything is going up: My rent went up, of course gas, utilities are particularly stressful and then of course groceries,” Spencer said.

Spencer said she contacted several California leaders including Newsom and Sen. Mike McGuire, D-Healdsburg, but was eventually told none of the inflation relief money would come her way. They told her instead look into “other forms of government assistance.”

“I’m disappointed that that was their response….Spencer said. “I didn’t feel like these inflation relief checks were government assistance.”