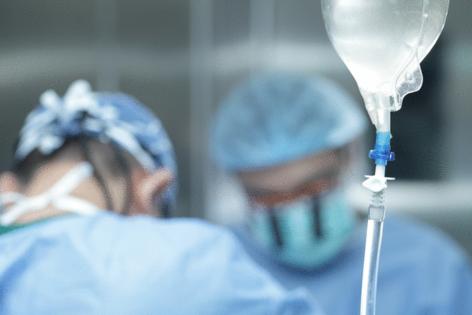 DENVER -- Coloradans who are interested in donating a kidney but concerned it would leave them unable to help if a family member got sick later have an option to get a “voucher” to shorten a loved one’s wait if they need a transplant in the future.

People who donate a kidney while still alive long have been prioritized for transplants, should they ever need one. The voucher system giving priority to up to five loved ones is newer and not as well known, though, and not every transplant center offers the option.

Tyler Coleman, of Denver, was the first person in Colorado to give a kidney through the voucher system in 2019 and recently spoke about the experience to encourage others to consider donating. He said he’d heard about living donation before, but going to conferences and hearing donors’ stories with his wife Jessica Coleman — living donor coordinator for Centura Health — convinced him it was something he wanted to do.

“There’s always some story out there (about donation), but it’s never enough,” he said.

He opted to list Jessica Coleman, who has Type 1 diabetes, and their son Ryker, 4, as potential voucher recipients. People with diabetes are at an increased risk of kidney disease. As far as they know, Ryker is at average risk of kidney disease in adulthood, but since he’s adopted, he might not know someone who’s a close genetic match if he ever does need a transplant.

“I was already missing one part, so what’s one more?” Tyler Coleman joked, referring to a previous lower leg amputation.

Dr. Alex Wiseman, executive director of kidney transplantation at Centura Health, said people who are willing to be donors sometimes hesitate, because they want to save their kidney in case a family member or friend needs it someday. The voucher gives them some security to donate to someone in need now, he said.

Transplants from living donors generally produce better results, because there’s time to do extensive planning and testing, Wiseman said. Not everyone has a relative with a compatible blood type who is healthy enough to donate and willing to do so, though.

The University of California Los Angeles’ health centers were the first to offer vouchers, starting in 2014. The first donor was a man whose grandson had a condition that might require a kidney transplant later in life. The grandfather wanted to offer his kidney, but knew he might not be healthy enough to do so by the time the boy needed it, said Dr. Jeffrey Veale, a transplant surgeon and professor of urology at UCLA. The voucher allowed the grandfather to feel comfortable giving his kidney to another person in need, instead of reserving it and risking that he’d be unable to donate if his health deteriorated, he said.

“The voucher donor kind of liberates us to give (the kidney) to the next person,” he said.

People who have certain infections or cancer generally can’t be organ donors, because of possible harm to the recipient. Those who have high blood pressure, diabetes or severe mental illness aren’t eligible because it may not be safe for them.

A relatively small share of kidney donations involve a voucher, but the number is expanding steadily. Nationwide, vouchers were involved in 22 donations in 2018 and 113 in 2020, Veale said. And the average donation starts a “train” of three other donations, as recipients’ relatives who had the wrong blood type to help their loved one give to someone else, he said.

“Vouchers definitely have a lot of room to grow,” he said.

So far, only six vouchers nationwide have been redeemed — perhaps not surprising, since kidney disease typically develops over years or decades. Those who have received a kidney after using a voucher waited between one month and five months. A voucher doesn’t guarantee any specific time, however, since a transplant can’t happen until a compatible organ becomes available.

While donors can list up to five people for a voucher, only one can use it, Veale said.

“You put one into the system and you take one out,” he said.

About 106,000 people are waiting for organs, according to the Health Resources Services Administration, and roughly 90,000 of them need a kidney. That’s an improvement from 2020, when about 113,000 people were waiting. Some of that improvement is because of skyrocketing drug overdose deaths, increasing the number of potential deceased donors, but living donations have also increased, Veale said.

Tyler Coleman said he has no regrets about donating, adding the hardest part was deciding when to do it, since he’d have to take off work and wasn’t allowed to lift their son for a few weeks. He estimated he was home from the hospital in about 36 hours and recovered in about two weeks. He later learned his kidney went to a man in Chicago, and got to meet the recipient and his family.

People interested in living kidney donation can start the screening process at KidneyRegistry.org.

BALTIMORE -- Just about everyone knows someone — or is that someone — who has aches or pains, some forgetfulness or other age-related issue or disease.

Let’s face it, the human body deteriorates as it ages: Bones ...Read More