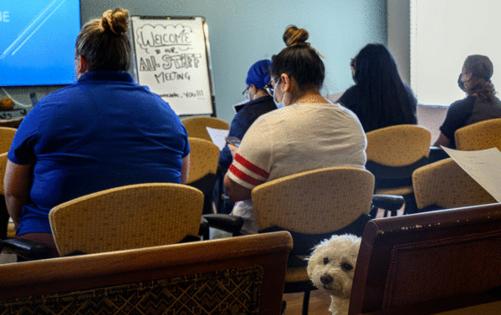 Mimi Poliner, a 94-year-old resident of the 115-person assisted living and memory-care home, said he always has an opinion. He just doesn’t state it.

“He sets an example that everyone here should follow,” she said dryly.

It’s easy to see why Francisco is one of the most popular personalities among Woodbridge Terrace’s staff and residents.

Francisco comes from humble beginnings, according to owner Jaye Silva, who works at Woodbridge Terrace as a human resources director.

Silva first met Francisco when she worked at an independent living facility in La Mirada. Then a pet of one of the residents, Silva said the diminutive dog would lock eyes with her and run to her side.

Perhaps it was meant to be.

Eventually the women who owned him could no longer care for him. She had medical and memory issues and was hospitalized.

Silva took the dog home thinking it was temporary.

A week later, Silva found out the woman would not be returning from the hospital and Francis – “I added a ‘co’ to his name to make him a little more manly” – became hers.

When Silva was hired at Woodbridge Terrace eight months ago, she asked if she could bring Francisco to visit her grandfather, who also lives there.

Everyone noticed how friendly and comfortable with people Francisco was.

“His temperament allows seniors to not feel afraid and to want to pet him,” Silva said.

And almost everyone noticed when he was left at home and not sleeping under her desk or prancing happily alongside as Silva roamed the facility.

The beauty of Francisco is that he’s like a grandson, Poliner said. “He’s like having the love without the responsibility.”

She leaned over to the pooch, adding, “You’re a very nice person.”

During a staff meeting last Wednesday, Francisco took a seat with about two dozen other employees. When nurse Jennifer Wilkerson arrived, she kicked him off his perch.

“He was just saving the seat for me,” she explained as she snuggled Francisco on her lap.

Kerri Raissian didn’t know what to do about her father’s guns when he died of COVID-19 in December at age 86 and left her executor of his estate.

Her father, Max McGaughey, hadn’t left a complete list of his ...Read More

Kerri Raissian didn’t know what to do about her father’s guns when he died of COVID-19 in December at age 86 and left her executor of his estate.

Her father, Max McGaughey, hadn’t left a complete list of his ...Read More

SOUTH PASADENA, Fla. — The notice pinned to each apartment door was clear: Rent would go up, for all tenants, in 60 days.

Nelda Whiteman, a 67-year-old former nurse on a fixed income, stared at the paper dumbstruck.

MINNEAPOLIS — Zenobia Silas-Carson didn't want her former boss to know she was losing her eyesight.

PITTSBURGH — On this day, one patient said no to the city’s slippery, snow-covered streets and asked to postpone his appointment, so now John Boccella, DDS, had time on his hands. He’s 89 years old and has been ...Read More

For people of a certain age, it takes only a few "senior moments" — struggling for words, names or memories — to cause worry.

Is this normal aging or mild cognitive impairment (MCI)? Is it all a run-up to Alzheimer's?...Read More