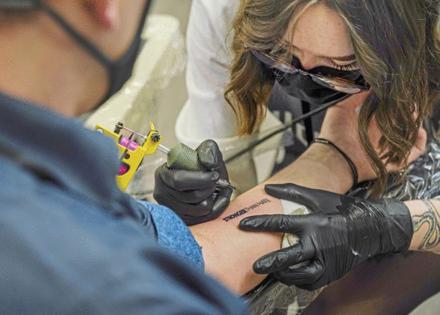 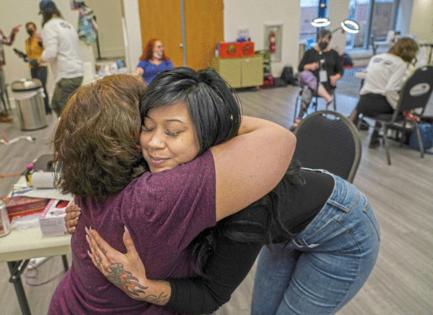 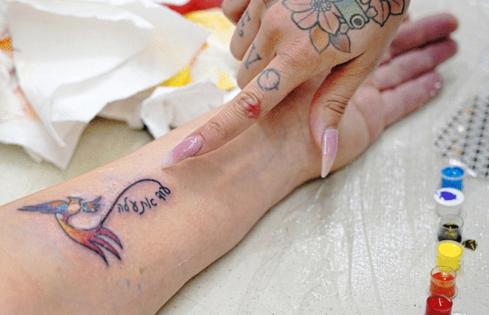 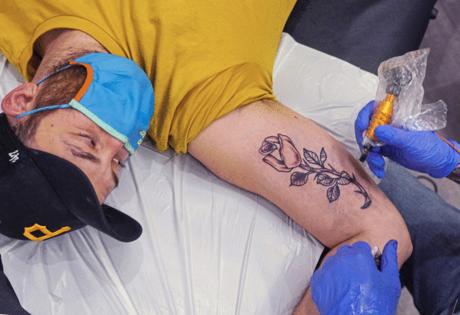 PITTSBURGH — If you happened to be wandering through the halls of the Jewish Community Center of Greater Pittsburgh's Irene Kaufmann Building Wednesday afternoon, you might have heard an unfamiliar sound emanating from one of its ballrooms and seen a few people wandering around who might not fit the typical mold of a JCC member.

The sound in question was the buzzing of tattoo needles, and the unfamiliar faces were tattoo artists. They were on hand in the Squirrel Hill JCC to help survivors of the 2018 mass shooting at the Tree of Life synagogue continue to heal from the trauma of that day through tattoo expression.

The folks getting tattoos included families of the victims first responders and former and current congregation members who were all deeply impacted by the tragedy.

Those survivors were taking part in what is known as "Healing Ink," a type of body-art therapy that was originally designed to help Israeli terrorist attack victims turn their scars into tattoos. The JCC event was put on by Healing Ink's parent company Artists 4 Israel in conjunction with the locally based 10.27 Healing Partnership, which was established following the Tree of Life shooting to provide aid to those most directly affected.

"Everybody in trauma has a right to however they're feeling," said Maggie Feinstein, director of the 10.27 Healing Partnership. "The idea of offering as many different opportunities for engagement as possible, I'm all for it."

Although tattoos are technically forbidden by Jewish law and frowned upon by some in the community, Feinstein has a background working in trauma and mental health recovery and appreciates how tattoos can help those who are suffering regain a sense of agency in unpredictable times.

Craig Dershowitz, Artists 4 Israel's founder and CEO, echoed sentiments about how tattoos can make it easier for trauma victims to "reclaim their bodies" as they continue on their journeys toward something at least resembling normalcy.

"It's the first thing people see when they see you," Dershowitz said. "So, too, are scars. It becomes a question of, how do you want others to be seen? By putting that tattoo on you, you're taking control of the narrative and how others see you."

Two of the survivors getting inked up Wednesday were siblings Amy and Eric Mallinger, whose grandmother Rose Mallinger was among the 11 victims on Oct. 27, 2018. Both of them received a rose tattoo to honor their grandmother's memory. Amy, 29, of Squirrel Hill, got a smaller rose along with Rose's initials on her right arm, while Eric, 29, drove back home from his current residence in Deptford, N.J., to receive a larger, more detailed rose on his left arm.

Eric said his grandmother was the "best person" he knew, and Amy described her as a "loving person" who cherished being around her family. They both reminisced about her cooking and said that things are as normal as possible for both of them more than three years after losing her.