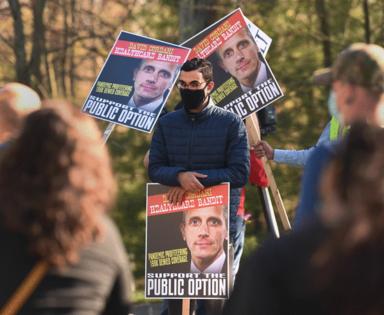 Colorado and Nevada this year passed public option plans — government-run health insurance plans — that are set to launch in 2023 and 2026, respectively. They join Washington state, which enacted its law in 2019 and went live with its public option in January.

“What we’ve seen is that when people can afford health insurance they get insured and get access to health care they wouldn’t otherwise have access to,” said Nevada Senate Majority Leader Nicole Cannizzaro, a Democrat who sponsored her state’s bill.

Republican state Sen. Joe Hardy countered that proponents haven’t proven that they can design a financially feasible public option. Hardy said he doesn’t expect that to change in the four years the law gives Nevada to devise a plan.

“This is the classic ‘Knock-knock, who’s there? I’m from the government and I want to help you,’” Hardy said. “It would be just another government program soaking up money for the bureaucracy.”

Whether Cannizzaro’s proposition will prove true — that people will choose the public option or that it will be cheaper than commercial plans — is up in the air.

The early results from Washington state’s experiment are disappointing. In many parts of the state, premiums for the public option plans cost more than premiums for comparable commercial plans.

Many of the state’s hospitals have refused to take part in the public option, prompting lawmakers to introduce more legislation this year to force participation if there aren’t sufficient health insurance options in a geographic area. And consumer buy-in is also meager. In its first year of operation, the state health insurance exchange sold only 1,443 public option plans, representing fewer than 1% of all exchange policies.

It’ll come as no surprise that eating a healthy, balanced diet can benefit our bodies in so many ways. But have you ever thought about how food affects your mood? Sure, we’ve all turned to carbs like our favorite ...Read More

We think of eating a nutritious diet and exercising as healthy behaviors, but sleep is one of the pillars of a healthy lifestyle. Why is this? Sleep sets the stage for our days. If we experience sound sleep for seven to ...Read More

DEAR MAYO CLINIC: I recently turned 50, and I walk about 1 mile daily and work out two to three times per week. I believe I am beginning to go into menopause, as I have not had a period in a few months. Also, I have ...Read More