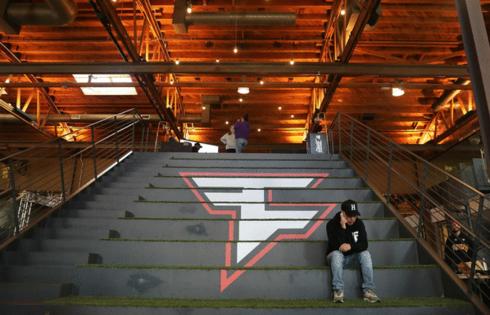 They queued up outside the Hollywood headquarters of his parent company, FaZe Clan, in a line that snaked around the block: a gaggle of eager preteens, streetwear-clad high-schoolers and beleaguered parents slowly inching down Melrose Avenue.

Many waited hours to brush shoulders with the vlogger, who regularly entertains an audience about as big as the population of Sri Lanka.

"I would literally love to meet every single person," Awadis, standing on a stage inside the warehouse-like office, told the fans who'd already made it in. "My team tells me it's impossible."

Those outside Awadis' orbit might be puzzled as to how he can draw such a large crowd. With just a handful of credits on IMDb — all as himself — he's hardly your standard celebrity; after a brief stint in Los Angeles, the 26-year old San Diegan moved back south to be closer to home.

Yet on the internet, or at least certain corners of it, he's something of a Big Deal. Twenty-two million people follow him on YouTube, his platform of choice, where he posts high-concept pranks and lavishly funded stunts. More still keep up with his life on TikTok (9.6 million), Instagram (6.6 million) and Twitter (2.6 million). Under the handle FaZe Rug, he's spun off all this online clout into a custom energy drink, a short-lived podcast and, recently, a signature DoorDash sandwich called the "Rugfather."

It was this sandwich partnership that brought him and his legions of fans out in droves for the Hollywood meet-and-greet.

"I love him," said Ethan Comingore, 15, of San Bernardino. "I watch him day and night."

There's a lot of money in all of this — both from the fans who loyally wait for hours on the sidewalk in hopes of fist-bumping their favorite YouTube star and the brands that, as with DoorDash, want access to the sizable soapboxes Awadis and other big-name social media personalities enjoy.

Enter FaZe Clan, the sprawling web content and lifestyle brand that organized the event this summer. It's among many companies trying to capitalize on the huge demand. This summer, the firm went public in a reverse merger valued at $725 million — with mixed results.