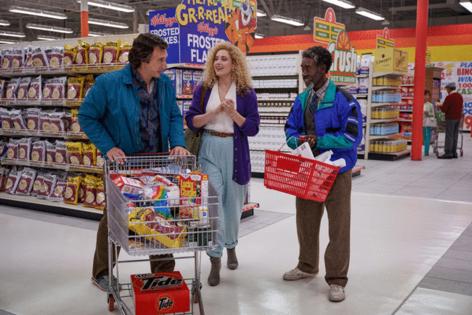 "White Noise," Noah Baumbach's jittery and inventive adaptation of Don DeLillo's 1985 novel, begins with what you might call a love letter to cinema. We've had a lot of those recently, but this one — a college lecture on car crashes in American movies — is appreciably sharper, funnier and more specific than most. As his students watch a montage of fiery vehicular explosions, professor Murray Jay Siskind (a wonderful Don Cheadle) implores them to look past the violence and see the spirit of optimism and enterprise pulsing underneath: "There's a constant upgrading of tools, skills, a meeting of challenges," he marvels. "The movie breaks away from complicated human passions to show us something elemental, something loud and fiery, head-on."

Baumbach, a specialist in complicated human passions, appears to have taken the professor's enthusiasm to heart. Before long, he'll stage his own elemental pileup: An oil tanker truck T-bones a freight train, sending its chemical cargo flying every which way and igniting a conflagration that belches deadly black smoke into the sky. There's nothing optimistic about what happens next, but the moment of collision is executed with undeniable gusto; Baumbach does, for a moment, seem like the proverbial kid playing with a big honkin' train set. Here and elsewhere in "White Noise," he happily applies himself to the upgrading of tools and skills, and to the meeting of the formidable, some would say foolhardy, challenge before him.

DeLillo's novel — bursting with theories both prescient and otherwise about consumerism, addiction, environmental decay, (mis)information overload and the universal if also uniquely American fear of death — has long been deemed unfilmable, as novels of ideas are reflexively assumed to be. In this case, there's not only the danger of mishandling the author's satirical targets or the icy precision of his latex-glove sentences, but also the risk of approximating them too closely, of locking them away in a remote, often fondly nostalgized '80s moment and draining them of their corrosive, unsettling power.

Baumbach does not quite surmount this obstacle; an eerie climax and one pretty good jump scare aside, the terror here belongs more to the characters and their era than it does to us and ours. But his affection for the novel produces its own warm, countervailing energy. Excessive reverence has killed many a well-meaning adaptation, but this "White Noise," at once wildly mercurial and fastidiously controlled, somehow winds up triumphing over its own death. It's too full of life — and also too funny, unruly, mischievous and disarmingly sweet — to really do otherwise.

Here, in the domestically contented but existentially paranoid flesh, are Jack Gladney (Adam Driver, paunchy) and his wife, Babette (Greta Gerwig, curly), raising four kids, three from past marriages, in a college town whose heart is its campus and whose soul is its supermarket. Lol Crawley's grainy-textured widescreen images (shot on 35-millimeter anamorphic film) steer us through the messy living spaces and immaculate grocery aisles of a postmodern "Brady Bunch," where boxes of Tide and cans of Coca-Cola gleam out at us with an almost otherworldly sheen. (Jess Gonchor's production design nails the '80s vibe and branding perfectly.)

We also spend some time with Jack's professor colleagues (they include a curt Jodie Turner-Smith and a delightful André Benjamin) as they hold intellectual court, never more mesmerizingly than when Jack and Murray deliver a dual lecture comparing and contrasting the early lives of Hitler and Elvis. Jack is one of the country's leading professors of Hitler studies, which makes his limited grasp of German his most embarrassing secret, at least initially. (Here it may be worth noting the presence of at least two marvelous German actors, Lars Eidinger and the veteran Barbara Sukowa, both perfectly cast in crucial roles.)

Babette, who teaches posture classes for the elderly, is hiding her own deep, dark secret, namely the pills she keeps popping when she thinks no one's looking. But except for their adorable toddler, Wilder (played by Dean and Henry Moore), their kids notice everything and delight in challenging parental authority, especially Babette's stubborn, concerned daughter Denise (a terrific Raffey Cassidy) and Jack's son, Heinrich (Sam Nivola), a fount of pessimistic data who's the first one to notice that deadly black cloud headed their way.

Until that point, "White Noise" has found a pleasurable sweet spot between the Baumbachian and the DeLillo-esque. Much of the tetchy, disorienting domestic banter, with its volleys of data and non-sequitur factoids, comes straight from the novel, even as the disorienting screwball rhythms (the editing is by Matthew Hannam) and the overlapping lines of dialogue hark back to the director's earlier comedies like "The Meyerowitz Stories" and "Mistress America." But once its famous "toxic airborne event" is set in motion and the entire town is forced to evacuate, the movie, like Danny Elfman's wondrously nimble score, kicks into overdrive. Soon Jack, Babette and the kids are on the run in their station wagon, with death looming in the rearview mirror and some vintage Spielberg riffs on the road ahead.

The pitch-perfect mimicry of '80s action-thriller clichés — just count how many garbage cans get knocked over by cars screeching in reverse — is something only a contemporary retooling of a retro story could have pulled off. That knowing playfulness is part of the movie's charm; so is the spectacle of Baumbach, a master of intimate, small-scaled comedy, embracing the conventions of the big-budget apocalyptic thriller, complete with lethal lightning storms, an unexpected river cruise and endless, chaotic traffic jams.

But Baumbach doesn't stop there. He may faithfully adhere to the novel's three-act structure (the rhythm of its many short, self-contained chapters proves more elusive), but his shrewdest and most suitably postmodern gesture is to offer up a highly elastic palimpsest of allusions, genres and styles. Primarily a domestic-romantic drama and a satire of academia before it becomes a full-blown disaster epic, "White Noise" also morphs, in its climactic stretch, into a seedy motel-room noir, a Monty Python sketch and, supremely, an LCD Soundsystem dance musical. (Don't skip the closing credits.)