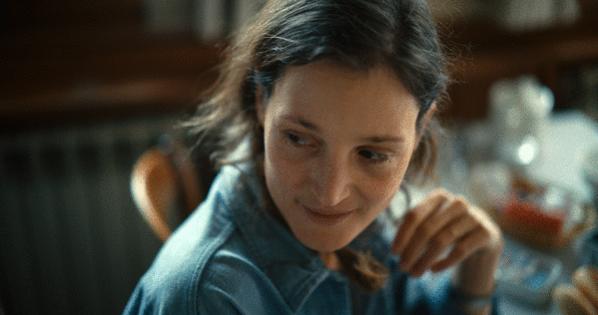 "Let's start again." The opening line of "Hold Me Tight" hits a little differently the second time around — and the movie, a jagged little heartbreaker from French writer-director Mathieu Amalric, is certainly built for repeat viewings. That might seem like an odd thing to say about a picture that deals in acutely painful emotions, venturing into dramatic terrain that some viewers may be content to visit once if at all. But Amalric, a superb actor-turned-reliably-fine filmmaker ("On Tour," "The Blue Room"), has a deft touch with surprises.

And so when you first see Clarisse (Vicky Krieps) slip out of her house on a cold morning — stealing one last glance at the sleeping figures of her husband, Marc (Arieh Worthalter), and their children, Lucie (Anne-Sophie Bowen-Chatet) and Paul (Sacha Ardilly), before driving off in a vintage AMC Pacer — the full significance of what she's doing may not be fully apparent. Your uncertainty may persist when, sometime later, Marc and the kids awaken and get started on their day, perplexed though not shattered (yet) to find their wife and mom missing.

As the movie progresses, toggling between Clarisse's travels and her family's efforts to carry on without her, it's as if they've all forged an unspoken pact: Marc, Lucie and Paul will move on without Clarisse, never seeing her again or really questioning why things have to be this way. But none of them can keep their sadness at bay, and Amalric, working with editor Francois Gedigier, has sly ways of bridging the gap between his characters, formally if not physically.

At one point Clarisse's voice becomes disembodied, and Marc hears it as surely as if they were in the same room. When Paul sinks fully clothed into a bubble bath at the precise moment his mother wearily scoops a handful of ice over her face, their bond feels strong enough to tear a hole in the story's fabric.

Really, though, the hole is already there. Something terrible has happened, and it explains both the necessity of Clarisse's sudden departure and the feelings of bitterness and despair that frequently seize hold of her, whether she's staring out at the horizon, drowning her sorrows or lashing out at a stranger.

What's happened to her and her family is no great mystery — it's revealed less than a third of the way through — but I'm reluctant to disclose it here, partly because the challenge of writing about this story is not entirely dissimilar to the challenge that Amalric has set himself in telling it. How do you unpack a family's upheaval while steering clear of the obvious? How do you describe a character's emotional journey without lapsing into exposition?

Amalric finds a way. I have no idea how this movie's source material, a play by Claudine Galea, might have worked onstage, in part because Amalric seems to have so fully unlocked the story's cinematic potential. There's a moment here when Clarisse wipes a layer of snow off her car and peers through the window, a look of utter desolation on her face, that cuts to the heart of her struggle more vividly than any conventionally scripted scene could.

There's also no shortage of filmmaking trickery: not just in the steady cross-cutting between Clarisse and her husband and kids, but also in the movie's casual juxtaposition of imagination and reality. You come to realize that there's an element of dissociation at play here, that not everything we see may be happening exactly as we see it.

The passage of time is measured in ways both serious and playful: in the painting of a newly renovated kitchen, in the fresh ink on Marc's tattooed chest and above all in the faces of the actors who play the older versions of Lucie (Juliette Benveniste) and Paul (Aurele Grzesik).

Lucie, a gifted pianist, has now become a full-blown virtuoso, and her skilled performances of Beethoven, Debussy and Ligeti provide crucial connective tissue.