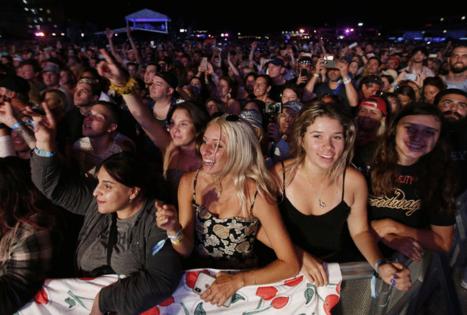 SAN DIEGO — The saga of the dormant KAABOO music festival has taken a new twist, with lawsuits in San Diego and Delaware that pit the event’s new owners — whose identity appears to be shrouded in mystery — against the San Diego Padres.

The latest turn comes three years after KAABOO concluded its five-year run at the Del Mar Fairgrounds in 2019.

It was then that the festival announced a new, multiyear partnership with the Padres and a 2020 move to the Major League Baseball team’s downtown Petco Park stadium, which the Padres operate and co-own with the city of San Diego. That prompted the fairgrounds’ board to threaten a breach of contract lawsuit, although it appears no litigation ensued.

Concurrently, the name of the upscale three-day music and food festival was changed from KAABOO Del Mar to KAABOO San Diego. The event’s social media page names were changed to reflect the new moniker.

But the 2020 edition of KAABOO, scheduled for Sept. 18-20 of that year, was shelved because of the COVID-19 pandemic before any lineup of performers was ever announced. Last year’s edition never took place, despite a statement by the event’s producers in May 2021 promising “exciting news and announcements coming soon via social and email.”

There have been no further announcements, and KAABOO’s social media pages have not been updated in the past year. To further complicate matters, the festival appears to have undergone at least three changes of ownership since the 2019 partnership with the Padres was announced.

Now, the newest owners and at least one of the past owners of KAABOO have teamed up against the Padres in a pair of lawsuits quietly filed earlier this year in San Diego Superior Court and the Superior Court of the State of Delaware.

Both suits allege the Padres are preventing KAABOO from returning to Del Mar this fall, or in the future, unless certain conditions are met. The suits further allege the Padres maintain there has been a breach of contract and are asking KAABOO to pay approximately $2 million in return for the team allowing KAABOO to be held in Del Mar, or anywhere else within a 100-mile radius of the baseball stadium.

The two sides strongly disagree over the status of the partnership that the Padres and KAABOO’s then-owners entered in 2019, which KAABOO maintains is a written-term agreement that was never finalized.

“The only thing I’ll say on the record, because it’s a pending legal matter, is that we don’t comment on the record,” Padres CEO Erik Greupner told the Union-Tribune last week.

The feasibility of KAABOO returning to Del Mar is difficult to gauge, at least for now.

“The bottom line is, the Padres have a binding agreement with KAABOO,” said a person familiar with the lawsuit, who would only speak to the Union-Tribune under the condition of anonymity.

With or without a new iteration of KAABOO on the horizon, an untold number of people who purchased tickets for the festival’s 2020 edition have repeatedly been stymied in their efforts to obtain refunds from KAABOO or its ticketing agency, See Tickets. According to the weekly music industry magazine Billboard, the festival owes at least $500,000 in refunds to ticketholders left in the lurch.

“We paid $3,400 for a pair of 2020 VIP tickets,” said Sacramento resident Jon Gianulias, who had planned to attend that year’s edition of KAABOO with his wife, Nica.

In lieu of a refund, the couple accepted the festival’s offer to give them two free general admission tickets if they rolled their 2020 VIP passes over to 2021. When last year’s edition of KAABOO failed to materialize, the couple — like other frustrated ticketholders who have contacted the Union-Tribune — made repeated attempts to obtain a refund. All of those attempts have been futile so far.

“No one ever responded,” Nica Gianulias lamented.

“We’re not lawyers,” her husband added, “but if anyone is filing a class action suit, we’d join in.”

So would San Marcos resident Kara Rentch, who with a friend bought six general “early bird” tickets in late 2019 for the next year’s edition of KAABOO. She, too, has failed in repeated efforts to obtain a refund.

“I tried everything and never got a response. I want my money back,” Rentch said. “I would think they’d want to respond, refund and apologize, but none of that has happened.”

The radio silence from KAABOO is not new.

Between 2020 and now, representatives for KAABOO repeatedly did not respond to inquiries from the Union-Tribune.

One exception, in mid-2021, came via email from an unnamed KAABOO representative who declined to identify themselves or respond to any specific questions. Their email address no longer exists.

In Union-Tribune articles about the festival’s unknown status published in 2020, 2021 and earlier this year, representatives for the Padres stated they were in the dark about KAABOO.

Or, as the team’s CEO Greupner told the Union-Tribune in February: “Unfortunately, we don’t have any regular communications with them and are not sure what they’re planning. We don’t have any clarity from KAABOO that they are going to hold the festival at the ballpark.

“We have an agreement — if the festival takes place at the ballpark — that would cover the economics of it. But it would need to take place, and that’s what we don’t have clarity from KAABOO about.”

KAABOO is represented in its San Diego lawsuit by the Los Angeles law firm of Carlton Fields LLP and in the Delaware suit by the Pittsburgh office of the international law firm K&L Gates.

Representatives for both law firms did not respond to messages left by the Union-Tribune. Neither did Jason Felts, who was involved in the production of KAABOO Del Mar for several years as well as the lone editions of KAABOO Grand Cayman and KAABOO Texas, both held in 2019.

The Texas event, at AT&T Stadium near Dallas, was poorly attended and lost $19 million, according to Billboard. At least two lawsuits by investors have been filed as a result.

In 2018, Felts founded Virgin Fest, which acquired KAABOO in September 2019 for $10 million from its co-founders, Bryan E. Gordon and Seth Wolkov. Two months later, Gordon and Wolkov sued Felts, who they alleged had pursued “a Trojan Horse strategy” to “infiltrate KAABOO” and “take possession of its most valuable assets.”

Felts and Virgin Fest countersued, alleging that Gordon had misrepresented KAABOO’s financial viability. Gordon was also sued in 2019 by his former wife, Molly Kingston, who alleged he had misappropriated $22 million from the couple’s holding company to help fund KAABOO.

These lawsuits came a year after Gordon told the Union-Tribune of his plans to expand the festival to up to 10 cities.

“Within five years,” Gordon said at the time, “I think we will certainly be a seven-to-10 festival brand across North America that may well stretch into Canada, Mexico and possibly other international markets.”

Gordon, a self-described “serial entrepreneur,” is the founder of the private investment firm Madison Ventures Plus. He has not responded to inquiries about KAABOO from the Union-Tribune.

In 2020, Virgin Fest — facing a threat of foreclosure from an unnamed lender — sold the rights to KAABOO and the rights to use its name and brand to the lender outright. The lender in turn transferred those rights to other companies.

The 2022 San Diego lawsuit against the Padres was filed on behalf of two companies, Live Holdings and Festival Licensing and Acquisition Corporation, LLC. Each is registered in Delaware, which does not require companies to identify who owns them.

A third company — Fest Founders LLC, which is registered in the Cayman Islands and is not a plaintiff in the lawsuit — on June 2021 transferred licensing rights to KAABOO’s name and brand to Live Holdings and Festival Licensing and Acquisition Corporation, LLC.

As of last summer, 2021 Gordon was facing at least six lawsuits related to KAABOO. He is not part of the two latest suits filed this year by KAABOO’s new owners against the Padres. But Virgin Fest, which Felts stepped down from in 2020, is. So is Ownco, a company Felts founded in 2019 that is now known as San Diego Fest Ownco.

The parent company of Ownco is Virgin Fest, which in turn is owned by the Virgin Group. Richard Branson, the billionaire founder of the Virgin Group, did not respond to a recent inquiry from the Union-Tribune about the status of KAABOO and Virgin Fest.

How long the litigation between the latest owners of KAABOO and the Padres could go on before being resolved is impossible to predict.

“What exacerbates this,” the person familiar with the lawsuit told the Union-Tribune, “is that the people the Padres entered into an agreement with have told the Padres they are no longer involved with KAABOO. However, they are involved in the litigation, so it’s all kind of confounding, which is par for the course with the last couple of iterations of KAABOO.

“It seems like they just leave ruin, destruction and lawsuits in their wake, and have a history of doing so.”