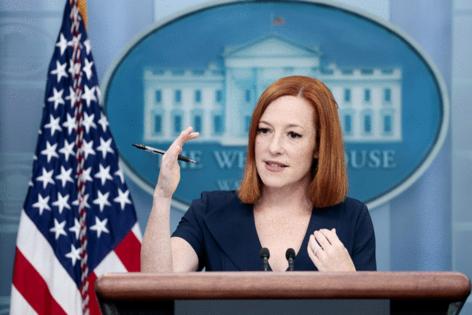 Former White House Press Secretary Jen Psaki will join MSNBC this fall and host her own streaming program starting in 2023.

The NBCUniversal-owned cable news channel made its new hire official Tuesday. Psaki's worked her final day in the Biden White House on May 13.

Psaki will appear on programs across MSNBC and NBC News while her own show is being developed. The news division said the program will be on NBC's Universal's streaming platform Peacock in the first quarter of 2023.

As of now, Psaki will not have a program on MSNBC, a surprising decision for such a high-profile hire. Psaki's skillful parrying in the White House briefing room has made her a familiar face to TV news viewers, and MSNBC could use some help in prime time.

MSNBC's biggest star, Rachel Maddow, has reduced her presence on the channel to once a week on Monday nights. The network is using a rotation of hosts in the 9 p.m. ET time slot during the rest of the week.

Psaki is not new to TV news. She was a contributor to CNN previously after serving as the White House communications director under former President Barack Obama and as the spokesperson for the Department of State.

She is also an alum of John Kerry's 2004 presidential campaign.

Psaki joins a long line of former White House press secretaries who have moved to television news. George Stephanopoulos held the position during the Clinton administration before he joined ABC News. Dana Perino, a co-host on the Fox News show "The Five," was in the post during the George W. Bush administration, during which MSNBC's Nicolle Wallace also served as communications director.

Former Trump White House Press Secretary Kayleigh McEnany is a co-host of the Fox News talk show "Outnumbered," while one of her predecessors, Sean Spicer, holds court daily on Newsmax.