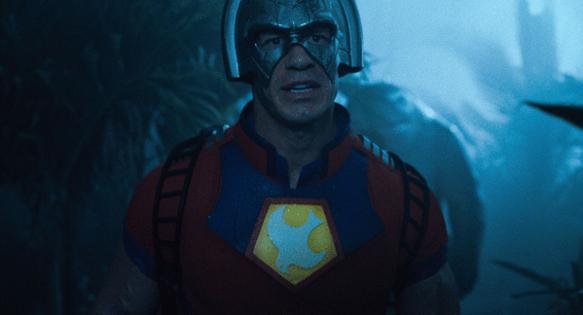 If Beavis and Butthead were still around, Peacemaker would be their favorite superhero.

He's an '80s power metal loving dude who gets his kicks off bathroom humor and foul-mouthed language, and "Peacemaker" reads like it was tailor made for the doofus duo. "Huh-huh, he said 'douchebag.'" "Yess, he shot a guy in the face! That's cool!" And so on.

It's all in keeping with the humor and energy of 2021's "Suicide Squad," in which John Cena's Peacemaker character made his debut. For Cena, who spent years playing a squeaky clean good guy in the ring with World Wrestling Entertainment, the ultraviolent, tighty whitey-wearing jokester was likely a welcome break, and showed his range better than his brooding bad guy turn in "F9: The Fast Saga."

Cena is supremely game in the role, but "Peacemaker" is limited by its relentless sophomoric humor and its high gore content. For prestige network HBO, it's one of its more lowbrow offerings, less "Watchmen" than it is "Entourage." (When Peacemaker jokes about Aquaman, he might as well be talking about the one played by Vinnie Chase.)

"Peacemaker" is helmed by writer-director James Gunn, the gore school graduate who went on to pilot the "Guardians of the Galaxy" movies, before old tweets got him in hot water with Marvel corporate parent Disney and he jumped ship to DC. (He'll be back in the MCU for "Guardians 3.") "Suicide Squad" was him having a ball doing everything he couldn't do in a Marvel movie, and "Peacemaker" is a continuation of that path, now with even more power chords. (The soundtrack is a who's-who of underappreciated Sunset Strip rock acts.)

Peacemaker, a superhero who cherishes peace by any means necessary ("I don't care how many men, women and children I need to kill to get it," he says), is out of the hospital after being laid out in "Suicide Squad," and he's enlisted to perform a new black ops mission or face a return to prison.

Joined by his sidekick, an eagle named Eagly, Peacemaker embarks on a secret mission handed down by Clemson Murn (Chukwudi Iwuji), his steely boss, and a crew of tactical agents including Leota Adebayo ("Orange is the New Black's" Danielle Brooks), Emilia Harcourt (Jennifer Holland) and John Economos (Steve Agee). The fate of the country is at stake, we're told, and with this crew, it's a good thing it's only the country and not the world.

A cheeky dance number during the opening credits sets the tone for the series, which is irreverent to a fault; characters bickering about whether the children's book characters were the Berenstein Bears or the Berenstain Bears is given just as much weight as the particulars of the top secret mission. (Count me on team Berenstein, by the way.)

The knock against earlier DC Comics titles, especially the Zack Snyder-driven properties, was that they took themselves too seriously; "Peacemaker" is guilty of taking itself not seriously enough.

At least it has a sense of humor, too bad it's limited to the level of limericks scrawled on the inside of bathroom stalls. Peace out.

Where to watch: Premiered Thursday on HBO Max