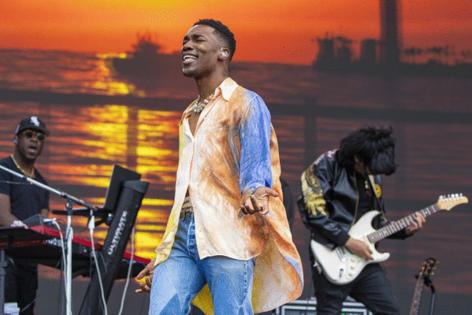 LOS ANGELES — In July, the Long Beach singer Giveon played to tens of thousands at Lollapalooza in Chicago, the first festival of his short but ambitious R&B career.

"I really wasn't sure how it would go," said the richly baritoned 26-year-old a day before a headline gig at New York's Irving Plaza. Giveon still vividly recalls playing to two dozen friends at South Bay bars just a few years ago.

Whatever catharsis the crowd went looking for that weekend, they found it in his emotionally ransacked ballads.

"To have the sound I have, to pretty much close out a festival, it's something I didn't see much of in school," he said. "It was always pop singers and rappers. It's so cool to see that space for R&B getting bigger."

That could be true on Grammy night as well. The singer, born Giveon Evans, is up for five awards in January, including top categories like record and song for his contributions to Justin Bieber and Daniel Caesar's lithe single "Peaches."

That song is, by far, the biggest of Giveon's fast rise in music — his debut EP just came out in 2020. But for R&B fans, it's a happy surprise to see a young singer with a striking timbre and era-spanning tastes glimpse pop stardom.

"I think if you go back to the '60s and '70s, that music felt newer, you were hearing stories told for the first time," he said of the golden eras for chart-topping, consciousness-changing soul. "But fast-forward 50 years and kids are forced to change it or it'll sound redundant."

This isn't Giveon's first pass at a Grammy. He was nominated last year for his "Take Time" EP, later compiled with its follow-up, "When It's All Said and Done." He's seen some Billboard Hot 100 success as well, guesting with Drake on "Chicago Freestyle" and sending his own "Heartbreak Anniversary" to No. 16.

That single, a gorgeous breakup-fixation ballad with its "Still got your things here/ And they stare at me like souvenirs," is up for R&B song this year. That more writer-centric award holds particular significance for him.

"If you take the music away and just read the lyrics, it could be a poem," he said. "You're not sure what decade it's in, and songs like that will always be timeless."