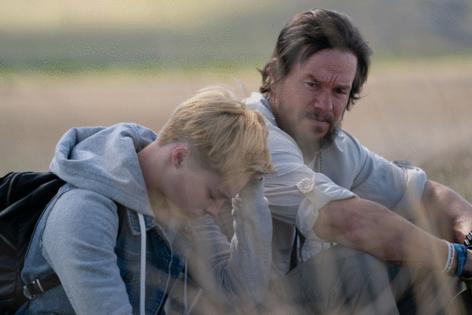 Bullying and intolerance can have a deadly effect,” Mark Wahlberg says at the beginning of “Joe Bell,” in theaters Friday.

The title character of this movie, originally titled “Good Joe Bell,” speaks, uneasily, to a group of high school students somewhere out West about his ambitious walk across America. The Oregon native undertook his bullying awareness campaign in 2013 to draw attention to his 15-year-old son Jadin’s experiences as a target of relentless harassment, at school and online, after he came out as gay.

This early scene in “Joe Bell” is framed as a sincere but not particularly effective interaction between Bell and the students. “Just be yourself,” reminds son Jadin (Reid Miller, very good). The movie tries to take that advice. But it’s like that scene with the students: sincere, but something’s missing.

Directed by Reinaldo Marcus Green (“Monsters and Men”) from a screenplay by the “Brokeback Mountain” team of Diana Ossana and Larry McMurtry, “Joe Bell” benefits from some authentically forceful actors, starting with Wahlberg and Miller, along with the reliably great Connie Britton as Bell’s wife, Lola. Gary Sinise arrives late in the story as a handily sympathetic small-town sheriff. It’s a spoiler, I suppose, to go into how and why Jadin and his father share the long cross-country journey in the first third of the picture.

Flashbacks reveal the screenwriters’ version of Jadin’s life before Bell’s walk across America. The teenager joined the high school football cheerleading team, which led to his crush on one of the football players. Easy-breathing connections were scarce for this boy.

But it’s not really about him. It’s about his dad, and how he grows into a better, more understanding, less rage-fueled version of himself. When Sinise shows up, he and Wahlberg share a heart-to-heart that many will find to be the best thing in “Joe Bell.” It’s Bell’s confessional and his epiphany, and when Wahlberg delivers the line “I just made Jadin’s being gay all about Joe Bell,” it’s another case of the movie pointing out its own limitations.

Wahlberg has been very, very good in various sorts of movies, and he manages some of his cleanest and least calculating acting in “Joe Bell,” a true-life story of a man who endured, second-hand, the tragic cost of prejudice.

“It’s not OK to torment somebody ‘cause they’re different from you,” the actor says at one point. Wahlberg’s own teenaged years, complicated by drugs and a lot of destructive rage, no doubt provided plenty of emotional fodder for this project. In 1986 and 1988 Wahlberg was charged in separate hate crimes against Black children and Vietnamese men. An attempted murder charge was reduced to a felony, to which Wahlberg pled guilty. He served 45 days of a two-year prison sentence.

Years later the actor was offered one of the leads in director Ang Lee’s “Brokeback Mountain,” a project Wahlberg told one interviewer “creeped him out.” He passed on the project. Fifteen years later, Wahlberg took on “Joe Bell,” which feels like a tidy, encoded act of atonement.

Is it fair game to bring any of this up in a movie review? Sometimes, yes. What an actor goes through in life; how that life shapes an actor’s presence and understanding and effectiveness in all sorts of roles; these things matter.