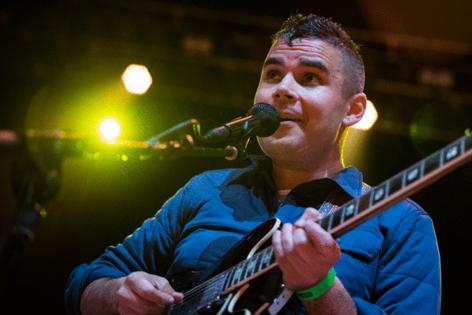 When Rostam Batmanglij was a kid growing up in Washington, D.C. — "must have been 13 or 14," he figures — he used to ride around in his older brother's car listening to a collection of Bruce Springsteen's greatest hits. So it was probably inevitable that the musician and producer (and former Vampire Weekend member) would end up decades later with a song like "4Runner" from his mesmerizing new album.

A sexy-dreamy bop about two lovers' road trip up the West Coast, "4Runner" carries some big Boss energy — the propulsive tempo, the images of "stolen plates" and a "blanket on the backseat," the very "I'm on Fire" falsetto at the end of the tune. Asked if he hears it too, Rostam smiles and reveals that it wasn't just that formative experience at play: Throughout the process of making his "Changephobia" LP, he was listening intermittently to the audiobook of Springsteen's memoir, "Born to Run."

"It's a fun thing to pick up and put down because you can take the time to listen to the records he's talking about," says Rostam, who's 37 and works under his first name. "He talks about his first record not sounding good, production-wise, and about how insecure he was about his voice. When I went back and listened to that record, I was like, 'Yeah, it doesn't sound good.'" He laughs. "But his voice sounds fantastic. To him, it was his downfall; to me, it was the best thing about it."

Rostam's craftiness and his analytical thinking — not to mention his interest in music history — are all over the meticulously rendered "Changephobia," which mingles fuzzy rock, aquatic R&B and 1940s- and '50s-style jazz. The album, his second solo disc, arrives after a few years in which he primarily wrote and produced for other acts such as Clairo, Maggie Rogers and Haim, with whom he earned a Grammy nomination for album of the year with 2020's "Women in Music Pt. III."

Says Danielle Haim of that Los Angeles sibling trio: "My sisters and I, sometimes we get in our heads a little bit. But Rostam just knows how to pull you out: 'Yes, go with that!' It's very freeing."

She recalls the session in which they came up with "Gasoline" — a slinky psych-soul jam the band recently recut with Taylor Swift — as an exercise in speed. "He started playing this cool guitar line on his vintage Strat that I love, and suddenly we were going back and forth with lyrics," she says. "It's crazy how fast we're able to put ideas together."

For all the musicality it deploys, "Changephobia" feels like an emotional breakthrough for Rostam, who identifies as queer and whose parents fled from Iran during that country's revolution. The intimately detailed songs ponder romance from a point of view not often heard in the largely straight white world of indie rock; Rostam, avoiding gendered pronouns in his lyrics, sings in a high, breathy voice that gently rejects old-fashioned binaries.

"Changephobia's" title hints at a kind of intellectual scaffolding — what Rostam describes in an explanatory YouTube video as an examination of "a fear of the unknown, of a future that is not yet familiar, one in which there is a change of traditions, definitions and distributions of power."

Yet the album's effect is deeply personal, as in the wistful "Next Thing," about his move — his "escape," as the lyric has it — from New York to California in 2014, and in the title track, a woozy internal monologue set to a swinging drum-and-saxophone groove: "Used to be afraid of what I felt/ And what was coming up ahead/ Then I learned I wasn't so strange/ Nothing I should hide from myself."