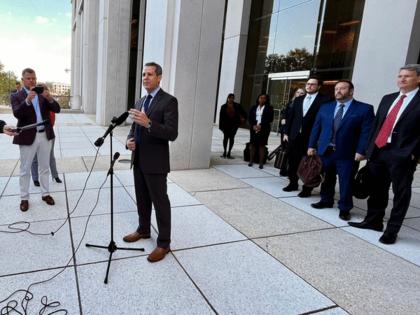 TALLAHASSEE, Fla. — Former Hillsborough County State Attorney Andrew Warren’s chief of staff told Warren not to sign a pledge that he wouldn’t prosecute abortions, according to testimony Thursday, the third day of trial in Warren’s lawsuit challenging Gov. Ron DeSantis’ decision to remove him from office.

During testimony, chief of staff Gary Weisman said that Warren consulted him often on public statements, including the June 24 letter from the left-leaning advocacy group Fair and Just Prosecution in which signees pledge not to prosecute abortion crimes.

“I thought it was bad for Mr. Warren ... and bad for the agency,” said Weisman, whom Warren hired in 2017. Weisman, who was portrayed as Warren’s closest adviser in the office, took the letter to be official office policy, with the belief that the office would not prosecute any abortions.

“My view was it was an announcement that we weren’t going to prosecute cases under the new law,” Weisman said.

The testimony undercuts Warren’s central argument in his lawsuit against DeSantis.

Two top prosecutors in the office have testified this week that they didn’t believe the letters were office policy, and one wasn’t aware of them until DeSantis cited them in his Aug. 4 removal of Warren from office.

DeSantis’ attorneys have argued that they seemed like the official policy, since they bore Warren’s name and title. Regardless, they were evidence that Warren was unfit for office by pledging a “blanket” policy not to enforce certain crimes.

Warren has argued that the memos were constitutionally protected free speech, and he’s not allowed to be punished for it.

Warren’s lawyers on Thursday tried to challenge Weisman’s credibility, noting that he’s a registered Republican. They also mentioned that the person DeSantis chose to replace Warren, Suzy Lopez, gave him a “big hug” in the office lobby when she took over and told him that she couldn’t do the job without him. Weisman is still Lopez’s chief of staff.