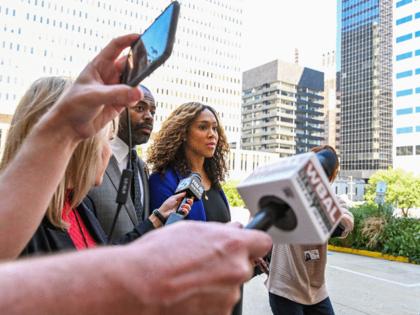 BALTIMORE — A federal judge could sanction Baltimore State’s Attorney Marilyn Mosby because her attorneys included prospective juror information in a filing in her perjury and mortgage fraud case.

Mosby’s attorneys were responding Thursday evening to a request from federal prosecutors to instate a gag order in the case prohibiting suggestive out-of-court comments from lawyers involved in the case. In that filing, her attorneys cited specific responses to a questionnaire sent out to prospective jurors in the case as evidence that the jury pool already was prejudiced against Mosby.

Griggsby wrote in the filing that a violation of that rule “may be treated as a contempt of court and may subject the violator to the disciplinary action of the court.”

According to Griggsby’s order, Mosby’s lawyers have until Monday to file a response compliant with the rules and until Friday to explain to Griggsby why they should not be penalized. The local rule for the U.S. District Court for Maryland that Griggsby cited does not outline a specific penalty for infractions.

Mosby’s lawyers wrote in the defense filing Thursday that about 30% of prospective jurors who responded to the questionnaire said they had made up their minds about the case. The defense did not say whether those respondents believed Mosby was guilty or not.

Baltimore’s outgoing elected prosecutor is charged with two counts each of perjury and making false statements. Federal prosecutors say she lied about suffering financial hardship because of the coronavirus to make two penalty-free, early withdrawals from her retirement savings under the CARES Act, Congress’ first pandemic relief package.

Mosby utilized the roughly $81,000 for down payments on a pair of properties in Florida: An eight-bedroom house near Disney World and a condo on the state’s Gulf Coast, according to her indictment. Prosecutors also accused her of misleading mortgage lenders by obfuscating her intentions for the house to secure a lower interest rate, and by failing to disclose a federal tax lien levied against her for unpaid taxes.

The Democrat’s criminal case has sparked extensive media coverage, with her attorneys and federal prosecutors arguing about the ramifications of the attention to different effects.

The defense filing Thursday said that approximately 65% of prospective jurors who responded to the questionnaire indicated they’d heard about the case.