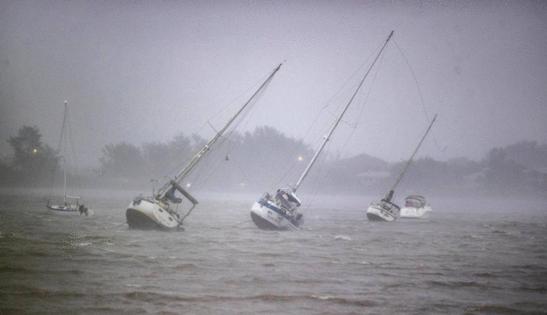 A lone cyclist who said his name is Adam pedaled through the downpour to the beach to take a look at the whitecaps, then to a parking garage where he had stowed his car. He wasn’t worried and he wasn’t the only one. But a lot of people were. They had already boarded up or evacuated, some to hotels in safer inland locations.

“I’ve seen worse in 40 years here,” he said, tightening the hood of his jacket hours before Ian was expected to make landfall with 155 mph winds. “We’ll see what happens but probably a ton of rain will keep dumping on us.”

Moored sailboats in Roberts Bay were heeling hard to port side as if they were locked in a stormy race to nowhere.

Most storefronts in the historic downtown were not covered by plywood or other protective material, save for a bank entrance piled with sandbags.

Though the storm remained 25 miles off the Southwest Florida coast at 10 a.m., there was some early minor damage. A mangled awning blocked the road under a tree with snapped branches at Oak Grove Mobile Park in Englewood, close to where forecasters expect Ian to make landfall. On Manasota Key, boats rocked in Lemon Bay.

And downed tree branches littered the roads to Boca Grande, where the waves grew taller by the minute and crashed on the moonscape beach.

“Worst-case scenario” was the term local meteorologists stressed on broadcasts as they predicted 155 mph winds and up to 10 feet of storm surge when Category 4 Ian made landfall, possible as a Category 5.

“We would have tried to ride it out but they cut off our water and sewer,” said Teresa Simmons, who lives on the water in Longboat Key. She, her husband and an elderly neighbor were sharing one king bed at the Hampton Inn in Venice. They brought their three dogs, Winnie, Emma and Buddy Boy, and were drying them with towels after a drenching walk. “Irma was not so bad except for downed trees. I walk in faith and not in fear. That’s how I roll.”

Two retired teachers from Massachusetts also hunkered down at the hotel after being evacuated by school bus from La Casa, their manufactured-home park in Northport.

“That’s where they’re saying the eye of the storm will hit,” said Barbara Cronin, 80. “With climate change these storms are getting worse and worse but I’m not worried at all. The last couple hurricanes my house wasn’t even touched.”

Said her friend Helen Brennan, 83, with poodle Timmy on her lap: “We’re safe and we’re alive and before you know it, it will be sunny and bright again.”

Just then an employee warned them the elevators would be shut down in 10 minutes in anticipation of a power outage.