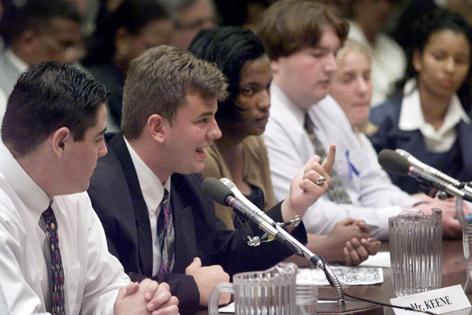 LEXINGTON, Ky. — Michael Carneal, the man convicted in the deadly 1997 Heath High School shooting near Paducah, Kentucky, has been denied parole and will have to serve out the remainder of his life sentence.

Carneal, now 39, appeared for his hearing before the entire Kentucky Parole Board early Monday morning. The board unanimously voted for him to serve out his life sentence.

“Due to the seriousness of your crimes, which dealt with a weapon, and had lives taken, and the seriousness again, we will allow you to serve out the remainder of your sentence,” said Chair of the board Ladeidre Jones.

Carneal was convicted on three counts of murder, five counts of attempted murder and a charge of first-degree burglary in 1998 following the shooting at Heath High School. Carneal opened fire in the lobby of the school, killing three girls and injuring five other people. He was 14 at the time.

After pleading guilty but mentally ill, he was sentenced to life in prison with the possibility of parole after 25 years. For years, Carneal and his legal counsel made efforts to vacate the conviction due to the severity of his mental health issues, according to court records.

Carneal’s parole hearing proceedings started Sept. 19 when victims and their families spoke to two members of the parole board. Carneal spoke in a following hearing on Tuesday. After that, the two board members who heard input failed to come to a unanimous decision on how to handle Carneal’s parole.

Carneal, who was diagnosed with schizophrenia, said he thought he would be able to be a productive member of society if he kept up with his medications. Despite this, Carneal admitted he still heard voices in his head which told him to commit violent acts against himself.

At the time, both Jones and Brock were able to come to a unanimous decision, and the case was referred to the entirety of the seven-person parole board.