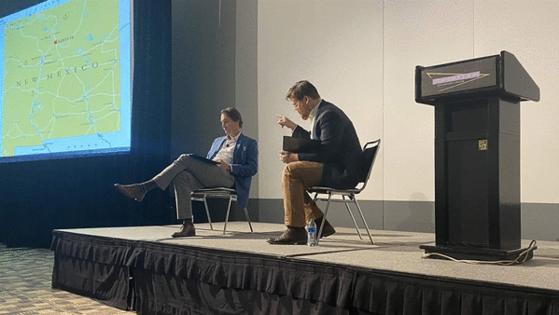 DENVER — Two state senators, a Republican and a Democrat, sit down on a dais in a dimly lit conference room at the Colorado Convention Center here and start talking. The two men are friends — they tease each other, call each other “dude” — and they’re sick of partisan fights.

So, they decide to try something radical. Each will vote with the opposing party on two of the most contentious issues in American politics: abortion and gun rights.

“If we don’t do something different, then it’s the same old script,” the Democrat said.

That’s the plot of a short play by New Mexico state Sen. Bill O’Neill, a Democrat, which was staged last week at the annual summit of the National Conference of State Legislatures, a nonpartisan organization that includes sitting legislators from every U.S. state and territory. It was one of several sessions that encouraged lawmakers to reflect on partisan battles and how they might reach a detente.

Bipartisan collaboration still exists in state legislatures, lawmakers attending the summit said. But they also said it’s getting harder to reach across the aisle, leading to either more gridlock or hyperpartisan legislation.

Old traditions of bonhomie are breaking down, and lawmakers risk blowback from voters, media outlets and their own caucus when they work with the other party.

Partisan animosity in the Nebraska legislature has increased over the past four years, said state Sen. Ben Hansen, a Republican. When he talks to lawmakers who served a decade ago or more, they say the legislature’s culture has completely changed.

Democrats and Republicans used to get together for drinks and work things out, Hansen said. “That doesn’t happen anymore.”

Some lawmakers at the conference acknowledged some bipartisan traditions make them uneasy.