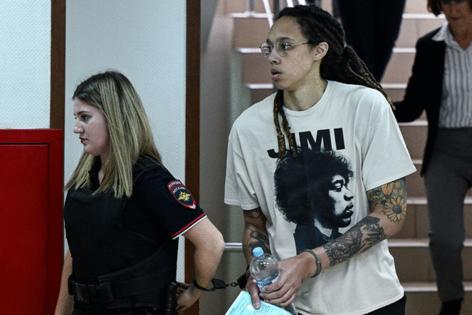 A court in Moscow began the trial of U.S. women’s basketball player Brittney Griner on drug smuggling charges Friday, the latest in a series of cases involving Americans held by Russian authorities amid deteriorating relations.

Griner, 31, a two-time Olympic Gold medalist, faces a maximum of 10 years in prison if convicted. She was detained in Moscow in February after police accused her of illegally trying to import hash oil into the country in vape cartridges.

She declined to respond to the charges at the hearing, according to the state-run Tass news service. Griner’s wife, Cherelle, called her “a political pawn” and urged President Joe Biden to secure her release, the Associated Press reported.

The U.S. — which had embassy officials present at her hearing — considers Griner to be “wrongfully detained.” National Security Advisor Jake Sullivan said earlier this week that the U.S. is “actively involved” in trying to resolve the case and that it had Biden’s full attention.

“We — and I personally — have no higher priority than bringing her and other wrongfully detained Americans, including Paul Whelan, home,” Secretary of State Antony Blinken said in a tweet.

Tass reported earlier that Russia may seek to swap Griner for Viktor Bout, an arms dealer dubbed the “merchant of death” who’s serving a 25-year sentence he received in 2012 for plotting to sell weapons to a Colombian terrorist organization. The U.S. hasn’t confirmed any talks on this.

Russia and the U.S. in April exchanged another jailed American, ex-Marine Trevor Reed, for Konstantin Yaroshenko, a Russian pilot sentenced in 2011 to 20 years for conspiracy to smuggle cocaine into the U.S. Reed was convicted in 2020 on charges of assaulting two Russian police officers, which he denied.

Russia has previously pushed unsuccessfully for a swap involving Bout and Whelan, who was sentenced to 16 years in 2020 after being convicted in a Moscow court of spying, an accusation he rejected. He was arrested in December 2018.

In June, a Russian court sentenced another American, Marc Fogel, a former U.S. diplomat and teacher in Moscow, to 14 years after convicting him of smuggling cannabis. He said he was carrying marijuana for medical purposes.