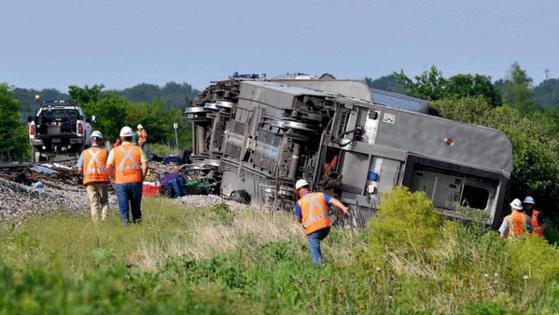 KANSAS CITY, Mo. — The number of people killed in the Amtrak train crash in Missouri on Monday has risen to four, according to the Missouri State Highway Patrol.

The patrol announced Tuesday that a fourth person had died at University Hospital in Columbia. Law enforcement officials and Amtrak estimated that about 150 people were taken to 10 hospitals for treatment of injuries after the crash.

Amtrak officials said 275 passengers and 12 crew members were on the train.

Several cars of an Amtrak train traveling from Los Angeles to Chicago derailed Monday afternoon after it struck a dump truck at a crossing near Mendon, Missouri.

The train was identified as a Southwest Chief Train 4. Mendon is about 100 miles northeast of Kansas City.