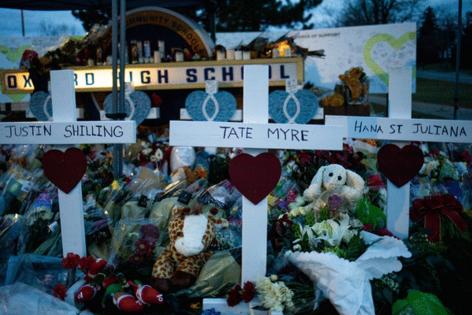 PONTIAC, Mich. — The Oakland County Prosecutor’s Office said Wednesday it will seek to intervene in a civil lawsuit after a judge ordered the release of all evidence contained in the Oakland County Sheriff Office’s file relating to the Nov. 30 Oxford High School shooting, including surveillance footage.

Seeking the evidence as part of a civil lawsuit are the families of two slain students, Tate Myer and Justin Schilling, and three other students who survived the shooting incident but remain traumatized, according to court documents.

“This is nothing unusual,” Johnson said Wednesday. “I have obtained this type of material in other cases, but for some reason, the sheriff’s office has blocked my efforts. Well, now the judge said they must turn over the material.”

Attorney Ven Johnson persuaded an Oakland County judge to released all evidence in the county Sheriff's Office's file related to the Nov. 30 shooting at Oxford High School. The county prosecutor is seeking to intervene in the civil lawsuit and stop the release.

In a statement, the Prosecutor’s Office explained it is concerned about any impact the materials will have on the criminal trials, and about giving the accused Oxford school shooter, Ethan Crumbley, the notoriety he sought in the Nov. 30 shooting at the school in which four students were slain and six others and a teacher wounded.

In several filings, 16-year-old Crumbley is referenced only as “EC” at the request of families of some of the victims.

“Our focus is on achieving justice in the criminal cases, and we don’t want any evidence released prematurely that could affect those cases,” said Oakland County Assistant Prosecuting attorney Marc Keast in a statement Wednesday.

“The civil cases are also an important part of achieving justice for the victims, but we are asking that the criminal cases be allowed to proceed before more evidence is released. In addition, there is substantial research and data showing that school shooters seek notoriety, as was the case for the Oxford shooter. We want to avoid any public release of video or other evidence that could inadvertently encourage future shooters.”

Johnson said “that is not their job.”

The sheriff’s office and schools can file with Chabot to reconsider her ruling or also file an appeal with the Michigan Court of Appeals, Johnson said.

“I suspect there is going to be a fight,” Johnson said. “But if that happens they are going to be sorry.”

The lawsuit filed by Shilling's family is against Oxford Community Schools and alleges the district violated its own policies and state law in handling concerns about the former student accused of killing four classmates.

The parents of Tate Myre sued Crumbley and his parents, along with six high school personnel. The lawsuit claims school officials were grossly negligent in their handling of the case, in violation of the Michigan Child Protection Law of 1975.

A three-day Group of Seven summit hosted by Germany ended on Tuesday, with leaders backing a plan to discuss how to cap energy prices and pledging to support Ukraine indefinitely.

Leaders will have the opportunity to ...Read More

The Biden administration unveiled a new plan to vaccinate eligible Americans against monkeypox, prioritizing those who have been exposed to the virus in states with the highest infection rates.

Hundreds of thousands of ...Read More

HARRISBURG, Pa. — If the University of Pittsburgh wants its annual $151 million appropriation from the state, it will have to stop its fetal tissue research.

Elmo got his Covid-19 vaccine.

Sesame Street’s iconic, perpetually 3-year-old Muppet got his COVID-19 shot in a public service announcement released by the Centers for Disease Control and Prevention on Tuesday. The ...Read More

While researchers already discovered a trained dog’s nose can identify COVID-19 with its scent-detecting capabilities, dogs have now ...Read More

WASHINGTON — Former President Donald Trump and his chief of staff, Mark Meadows, were aware the Capitol was a target of violence and that Trump supporters were armed with weapons when the president urged them to march to...Read More