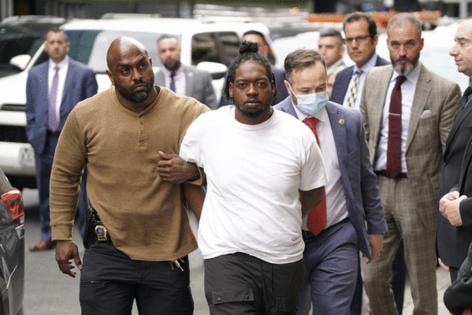 NEW YORK — The cold-blooded subway shooter who randomly gunned down a Goldman Sachs researcher on a Manhattan-bound train has been busted, police said.

Andrew Abdullah surrendered Tuesday afternoon and was expected to be charged with murder in the senseless Sunday slaying of Daniel Enriquez, 48.

The arrest came after all-day negotiations between police and a New Jersey clergyman. Abdullah arrived later in a minivan, and was quickly taken into custody.

Enriquez, heading to a brunch with friends, was sitting in the last car of a Manhattan-bound Q train as it approached the Canal St. station when he was shot about 11:45 a.m. Sunday, police said.

“According to witnesses, the suspect was walking back and forth in the same train car,” NYPD Chief of Department Kenneth Corey said shortly after the fatal shooting. “And without provocation, pulled out a gun and fired it at the victim at close range as the train was crossing the Manhattan Bridge.”

The heavyset bearded suspect, who witnesses said had no prior interaction with Enriquez, got off the train at the Canal St. station and fled, Corey said. Enriquez was rushed to Bellevue Hospital, where he died at 12:14 p.m.

Train operator Luis Irizarry, 40, recounted the terrifying moment gunfire erupted in the car, saying as he walked to the back of the car, he spotted Enriquez’s lifeless body.

Griselda Vile, the victim’s 43-year-old sister, called the killer “pure evil” — robbing the family, and city, of a generous and caring man who loved the city back.

Her brother, she told the Daily News, graduated New York University, worked for Goldman Sachs and donated countless hours of his time to artists in need.

“I want people to know that he was one of the smartest people I know,” she said. “He would try so hard to be in his family’s lives. He was jovial, generous. He doesn’t do anything bad.

The shooting comes about 5½ weeks after a gunman set off a smoke canister and sprayed 33 bullets into a crowded Manhattan-bound N train as it approached the 36th St. station in Brooklyn on April 12. Ten people were shot and wounded, and 13 others were otherwise hurt.

Vile said Mayor Adams needs to make do on his promise to make the city safe again.

Her brother, she said, was a patron of the arts.

“He helped a lot of aspiring directors, filmmakers, painters and sculptors, that’s just him being himself,” said Vile. “When people would fall on hard times, he would help them.”

Vile also recalled countless times he put up money for vacations, dinners, outfits and art supplies for friends and family.

“My brother would give his shirt off his back to his friends,” she said. “He was a loyal, loyal person. He loved life so much.”

Vile said she learned of her big brother’s slaying while she and husband and their two small children were eating pizza and watching a new Marvel superhero movie.

“They’re devastated,” Vile said of the children. “They’re in shock. For them to be so little and to hear that he was murdered in cold blood ... " she said, her voice trailing off.

“Maybe he was sleeping, maybe he was listening to music,” Vile said of her brother. “But this person had no heart, no soul. This was pure evil."