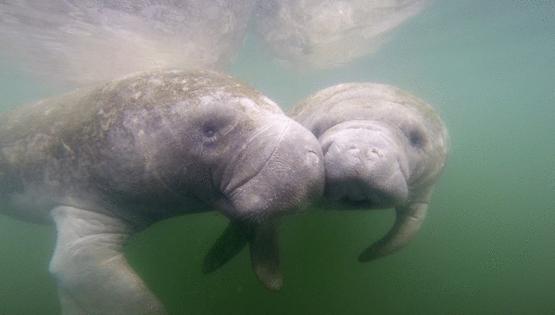 State and federal wildlife officials undertook the unusual step of offering food to manatees last month after an unprecedented number of deaths last year, most from starvation. The cause was the loss of seagrass in the Indian River Lagoon, largely due to polluted runoff from farms and cities.

But so far the manatees have been ignoring the lettuce offered them, said Ron Mezich, imperiled species management section leader for the Florida Fish and Wildlife Conservation Commission, in a conference call Thursday with reporters.

He said it’s possible they ate the lettuce while no one was looking but that so far no consumption of lettuce has been observed.

A record 1,101 manatees died last year, most from starvation in the Indian River Lagoon area, according to the state wildlife commission. Last November state and federal officials set up a unified command to address the manatee deaths, increasing patrols beefing up rescue efforts for manatees in distress and setting up a system to offer them food.

Patrick Rose, executive director of the Save the Manatee Club, blamed bureaucratic delays by the federal government for the program’s failure so far.

Although the state wildlife commission wanted to start the feeding program months ago, he said the U.S. Fish and Wildlife Service hesitated to approve it for months. Had the federal government moved sooner, he said, the program could have been ready in August and able to pursue more options for feeding them.

“I can’t tell you how frustrated I am by the late decision by the service,” he said. “So many things could have been tried and experimented with before we reached this point.”

The current program, for example, attempts to feed them near the intake zone of Florida Power & Light plant at Cape Canaveral. Vastly more manatees are at the plant’s discharge zone, which is farther from land and would have required more planning for a feeding operation.