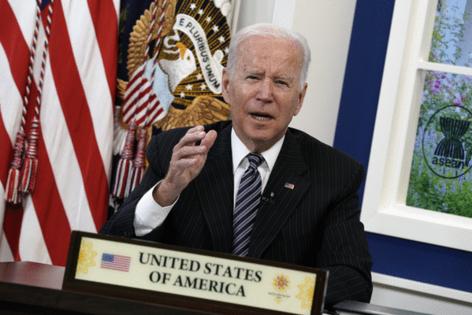 WASHINGTON — President Joe Biden is preparing for two international conferences in Europe this week, campaigning for Democrats and trying to reach an agenda-fulfilling deal on expanding safety net programs.

But he cleared a chunk of his schedule on Tuesday and Wednesday to participate in a virtual summit of Southeast Asian nations, a sign that the president remains keenly focused on foreign policy challenges posed by a rising China.

Like his predecessor, Donald Trump, Biden has expressed alarm about China’s trade practices, its efforts to assert control over the South China Sea and its increasing aggressive behavior toward Taiwan.

However, Biden is devoting more time to building alliances, a shift from Trump, who skipped the same summit for three straight years.

“You can expect to see the United States deepening our longstanding cooperation,” Biden said during the first of two meetings of the Association of Southeast Asian Nations, or ASEAN. He described the organization as “a linchpin for maintaining the resilience, the prosperity, and security of our shared region,” and he suggested that he was planning a trip to Asia.

Experts said Biden’s decision to simply show up for the summit is a show of progress.

“The bar is relatively low,” said Ja-Ian Chong, an associate professor of political science at the National University of Singapore. “And part of the reason the bar is low is because there’s still a hangover from the Trump years, where there was a lot of unpredictability and uncertainty.”

ASEAN includes Brunei, Cambodia, Indonesia, Laos, Malaysia, Myanmar, the Philippines, Singapore, Thailand, and Vietnam. Although most of the countries are small, their total population is 650 million and their combined economy would rank as the seventh largest in the world.

Biden’s participation in ASEAN came in the middle of a busy week. He’s trying to seal the deal on legislation that would, among other things, increase funding for childcare and guarantee paid family leave for workers, and the White House is working with Democrats on ways to pay for expanded benefits.

He also campaigned on Tuesday for Terry McAuliffe, the Democratic candidate in the closely watched Virginia governor’s race, and is preparing to fly to Europe on Thursday. He’s attending the G-20 forum in Rome and a United Nations conference on climate change in Glasgow, Scotland.