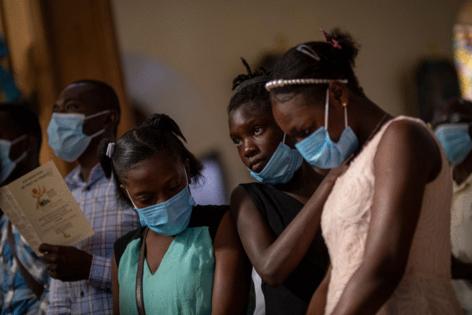 WASHINGTON — The White House said Tuesday that President Joe Biden is directly engaged in an effort to rescue 17 missionaries, including five children, being held hostage by a gang in Haiti since they were kidnapped 11 days ago, and that “every possible option” is on the table to secure their freedom.

U.S. National Security Adviser Jake Sullivan said that Biden continues to be briefed daily on the hostage situation, which involves 16 Americans and a Canadian citizen who work for Ohio-based Christian Aid Ministries. The president, he said, is especially concerned about the well-being of the children, the youngest of whom is 8 months old.

“I personally give an update on this issue every single day to the president, who is taking a deep interest in making sure we get every single one of those people home safely,” Sullivan said.

The group was kidnapped on Oct. 16 by the 400 Mawozo gang in Port-au-Prince after returning from visiting an orphanage east of Port-au-Prince. The gang asked for a $17 million ransom — $1 million per hostage — in order to release them.

Their kidnapping in Haiti comes as the country faces a cascade of crises, including a surge in kidnappings and armed gang violence. Schools and businesses have been shuttered due to a lack of fuel, and hospitals have issued SOS, warning that patients will die if fuel is not forthcoming. The gang-engineered halt in fuel deliveries, including at the port, is affecting cellphone service, which relies on towers having fuel.

In recent weeks, armed gangs have also kidnapped fuel truck drivers and hijacked their rigs, leading to a strike by drivers and transportation unions.

After deploying three FBI agents to Haiti that Sunday, the United States has sent “a significant number of law enforcement specialists and hostage recovery specialists to work closely with the ministry, the families and the Haitian government to try to coordinate and organize a recovery,” Sullivan said.

“We are looking at every possible option for how to go about doing that,” he said. “I will be sensitive to what obviously is a delicate situation, not say more here, other than we have put the assets and resources in place that we believe can help bring this to a successful conclusion. “

Tuesday marked the group’s 11th day in captivity and it remains unclear where they are being held. Late Monday, a Haitian-American pastor who lives in Miami and was kidnapped on Oct. 3 was released after his abduction created an uproar in Haiti. Relatives of Pastor Jean Pierre Ferrer Michel and two congregants, who were also abducted, reportedly had paid $300,000 to secure their release, but only one of the three, a female, was initially freed. Michel and fellow hostage Norman Wiener were finally released late Monday night.

While the group’s abduction made news in Haiti, it barely caused a stir in the United States despite Michel’s status as a U.S. citizen.

Sullivan said in the case of the missionaries, the United States has to manage the situation “as carefully as possible so at the end of the day we achieve our objective, which is the safe return of every single one of those both adult and children.”

He said the “children aspect of this is something obviously the president is quite focused on, to make sure they’re taken care of and that they get home OK.”