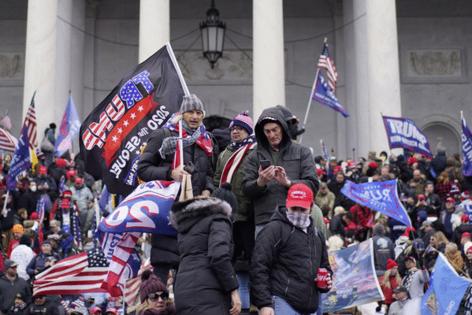 Most of the dozens of those with military ties who have been arrested on various charges including assaulting police officers are veterans.

But some were active-duty members of the Army, Navy, Air Force and Marines.

Nearly 500 people in all have been arrested around the country for their roles in the attack on the Capitol, which came after former President Donald Trump urged thousands of his followers to “fight like hell” to overturn his loss in the 2020 election.

The FBI and Department of Justice prosecutors have been poring over videos of the riots and even social media feeds to identify and track down rioters, who were allowed to leave the Capitol without being arrested.

Some of the accused rioters have sought to shift the blame to Trump for their actions, saying they believed they were acting on his orders.

Trump has denied inciting the riot although he praised participants as “wonderful people.”

Democrats want the military to root out racists and extremists from the military, citing the danger they face to American democracy. But the GOP, which still mostly backs Trump, does not want to see what they deride as a witch hunt of his supporters.

The role played by service members and other law enforcement officers in the Jan. 6 attack is one of the issues that supporters hope will be addressed by a bipartisan 9/11-style commission into the storming of the Capitol.

Republican senators blocked the creation of the committee, which they fear will uncover embarrassing new facts about Trump’s support for the riot.