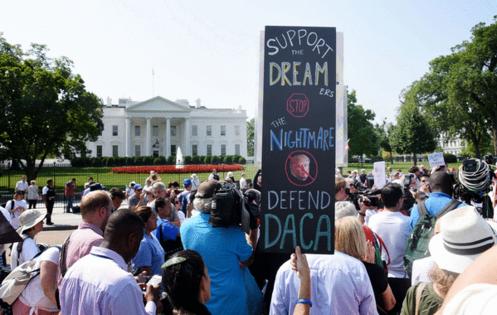 WASHINGTON — Senate Republicans on Tuesday signaled they are willing to hold up House-passed legislation to provide a citizenship path for millions of undocumented immigrants, including those brought to the U.S. as children, amid high levels of migration — previewing another congressional showdown on immigration.

During a Senate Judiciary Committee hearing on the bill, ranking member Charles E. Grassley, R-Iowa, said he sees “justice” for immigrants who came to the country when they were children, known as “”Dreamers,” “as a legitimate thing to do.”

However, he also said any legislation providing legal status to these individuals must come with measures boosting border security and immigration enforcement. He cited current levels of high migration at the southwest border, a point echoed by several of his Republican colleagues throughout the hearing.

“If we want to provide legal status for Dreamers, we must secure our border, so that we don’t find ourselves in the same situation again, 20 or 30 years from now. Unfortunately, the administration doesn’t appear to be serious about doing that, and the bills we’re discussing today don’t even attempt to do that,” Grassley said.

Sen. John Cornyn, R-Texas, also took issue with the broader scope of legislation the House passed in March to establish an earned path to citizenship for millions of immigrants with temporary protections, saying it is “politically unlikely” the Senate would pass it.

A narrower version of the bill introduced in the Senate also would cover recipients of the Deferred Action for Childhood Arrivals (DACA) program, the Obama-era program providing temporary protections for undocumented immigrants who came to the U.S. when they were children. The House bill central to the hearing, however, also covers immigrants who came to the U.S. as adults now living under temporary protections for designated countries in crisis.

“Radical policies that reward illegal immigration will not pass the Senate, and it’s unfair for the DACA recipients to tie their fate to such ill-considered legislation,” Cornyn said. “A clean, bipartisan bill is the only path forward.”

Not mincing words on the Senate floor the day before, Cornyn said the House measure “stands zero chance of being passed by the Senate” and accused his Democratic colleagues of holding a hearing on a “dead-on-arrival bill.”

The Senate hearing was held on the nine-year anniversary of the creation of DACA, which President Barack Obama announced from the Rose Garden in June 2012.

The panel’s Democrats invited Leon Rodriguez, former U.S. Citizenship and Immigration Services director under the Obama administration, and two health care workers living with DACA and temporary protected status. The committee Republicans invited Joseph Edlow, a USCIS leader under the Trump administration, and Michelle Root, whose daughter Sarah was killed by a drunk driver who was undocumented.