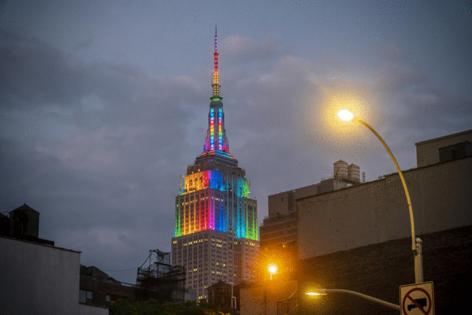 NYC Pride had been expected to announce the Gay Officers Action League’s exclusion from the parade early next week.

But GOAL pre-empted that announcement by issuing a news release on Friday night — and it referred to parts of the NYC Pride statement on its exclusion that have not been released yet.

“It is demoralizing that Heritage of Pride (NYC Pride’s formal name) didn’t have the courage to refer to GOAL by name in its announcement, referring to us only as ‘Law Enforcement Exhibitors,’” Downey said. “The label is not only offensive but dehumanizing for our members.”

GOAL was formed in 1982 after NYPD Sgt. Charles Cochrane outed himself delivering testimony on anti-gay discrimination legislation pending before the City Council. The progressive organization paved the way for similar groups across the country.

Cochrane became the first openly gay officer in the NYPD, GOAL says. He died of cancer in 2008 at age 64.

Since then, GOAL has become a nonprofit civil rights organization and has advocated for LGBTQ rights from inside the police department for nearly 40 years.

The organization has about 300 active members who would take part in the Pride march and about 2,800 affiliated members.

NYC Pride will move forward this year with some in-person events, but the annual Pride March scheduled for June 27 — traditionally a big event in Greenwich Village — will take place virtually because of COVID-19 precautions.