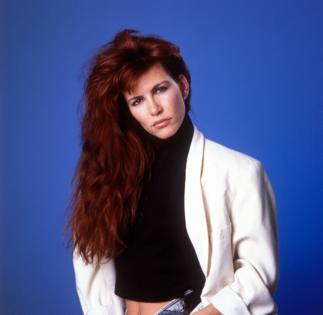 LOS ANGELES —It was the late 1980s, and “Bachelor Party” actress Tawny Kitaen wasn’t necessarily looking for small-screen stardom. But the U.K. hard-rock band Whitesnake was shooting a promo, and its director decided it needed a star. Kitaen, who would later marry frontman David Coverdale, agreed to lend her fierce looks, fiery mane and sensual charisma to a now-classic series of rock music videos — and the rest is MTV history.

Electrifying videos starring Kitaen for “Still of the Night,” “Is This Love,” “The Deeper the Love” and “Here I Go Again” sealed her icon status in the hearts and fantasies of a generation of rock fans and propelled Whitesnake up the charts. Her music video moves — including an impromptu cartwheel atop two parked Jaguars at the start of “Here We Go Again” — made Kitaen an instant MTV star at the height of the network’s cultural clout and ushered in a new era in rock iconography.

Those who knew her weren’t surprised when the San Diego native landed movie roles and ended up in heavy rotation on television. The excitement of show business had always called to her.

“She didn’t have patience for the drudgery of life,” her brother Jordan Kitaen told the Los Angeles Times. “Something had to be going on. She wanted life to be exciting, and when it wasn’t, she got bored.”

Kitaen — who would go on to appear in films and TV shows such as “Seinfeld,” “The New WKRP in Cincinnati” and “Hercules: The Legendary Journeys,” as well as the reality series “Celebrity Rehab with Dr. Drew,” addressing her battles with addiction — died Friday morning at her home in Newport Beach, according to the Orange County Coroner’s office. She was 59.

The cause of death was not yet determined. Kitaen’s daughters Wynter and Raine Finley confirmed her death Saturday on social media.

“We are heartbroken and saddened to announce the death of our mom,” they wrote. “We just want to say thank you for all of you, her fans and her friends, for always showing her such support and love. You gave her life everyday. We miss her and love her and we know her legacy will live on forever.”

In a 2010 interview with the Los Angeles Times’ Daily Pilot, Kitaen spoke openly about her rocky past. “I’ve been around the block a few times,” she said. “There is still a lot to learn, but I’ve learned a lot in my life through error.”

The oldest of three children, Kitaen was born Julie Kitaen in 1961 in San Diego.

“She was a precocious, special child,” said her brother. “Wherever she was in a room, that’s where everyone was laughing.”