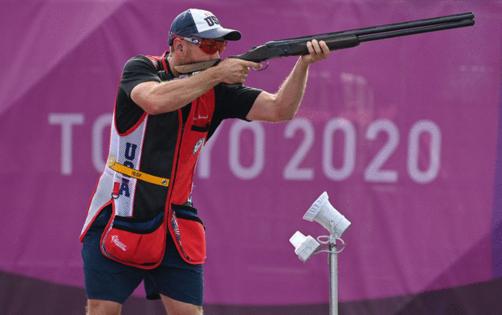 FORT WORTH, Texas — When you think of track and field at the Olympics, names such as Jesse Owens and Usain Bolt probably come to mind. For gymnastics it's likely Simone Biles, and swimming it's hard to beat Michael Phelps.

How about skeet shooting? Well, Vincent Hancock further cemented his legacy as the sport's greatest by setting an Olympic record and winning his third gold medal at the Tokyo Games.

Hancock is the only Olympian skeet shooter to win multiple gold medals. The Fort Worth resident proudly had his gold medal with him during a teaching session this week at the Fort Worth Trap & Skeet Club, saying it's the biggest and heaviest medal he owns.

"We're all vying for the same thing. We're always dreaming of winning that gold medal," Hancock said. "For me to be able to get there in Tokyo and do it for a third time is a complete dream come true."

Every Olympic medal features Nike, the Greek goddess of victory, the Panathenaic Stadium in Athens and the official name of the Games (this year's are called the Games of the XXXII Olympiad Tokyo 2020) on the front. Host countries are able to change two things: the size of the medal and the design on the back.

According to the Tokyo Olympic Committee, the theme of Tokyo's medals were "light and brilliance" with patterns of light to represent athlete energy and "those who support them."

"Everything in Japan is laced in culture and history and simplicity," Hancock said. "They do a lot of things like that right over there, and this medal shows that."

Hancock said his gold medal from 2008 Beijing features white jade on the back, while his 2012 London is a complex design that includes the city's logo and an interlocking grid pattern.

Hancock, 32, is hopeful to add another gold medal at the 2024 Games in Paris. Hancock said he is fully committed to continuing his Olympic career in Paris, but is not sure beyond that. Competing in a U.S.-based Summer Games in Los Angeles in 2028 is appealing to him but he doesn't know if that'll be in the cards.

"I know I'm going to Paris in '24. After that, we'll see," Hancock said. "My kids will be older. I'll be 39 when the L.A. Games roll around, but I was the youngest medalist in skeet this year. The bronze medalist was 57 years old and the silver medalist was around 40. I'm fully capable of doing this for a long time if I choose to. We'll see."

TOKYO — The most anticipated athletic performance of these Olympics became a metaphor for the Games themselves.

Days after Simone Biles dropped out of the gymnastics team final because she suddenly lost the ability to ...Read More