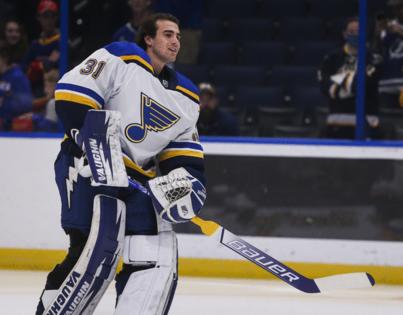 TAMPA, Fla. — Kyle Konin was just getting off the ice Thursday following his weekly morning skate with the Lightning alumni when he saw he had three missed calls from general manager Julien BriseBois.

“I was like, ‘Oh boy, I either did something really bad or something really good,’ ” said Konin, a St. Petersburg resident and former college goaltender who paints goalie masks for a living.

About seven hours later, Konin, 23, was suited up for the St. Louis Blues for their game against the Lightning at Amalie Arena. Though he didn’t play in the game, Konin led the team on to the ice for pregame warmups and sat on the visitor’s bench.

“I didn’t expect any of that,” Konin said. “I’d say everything just surpassed my expectations. I guess my expectation was that I was going to get a jersey and get to sit on the bench.”

It might be the rarest — and most interesting — opportunity in professional sports, when a normal person can go from spectator to participant, if only for a day.

Konin is the Lightning’s emergency backup goaltender. Each NHL team has to have one available at home games who can dress should either team need a goaltender in the 11th hour. Most times, it never comes to fruition.

But when Blues starter Jordan Binnington went into COVID-19 protocol Thursday morning and the team was unable to call up a backup from their AHL affiliate due to salary-cap issues, Konin was called into duty.

For Konin — who spent most of his childhood in Clearwater, whose first time on skates was at a Lightning youth camp in Brandon and who skated at the then-St. Pete Times Forum as the Thunder Kid before a Lightning game — it was a dream come true.

His parents, Jeff and Gina, are Clearwater residents and Lightning season ticket holders, but Thursday’s game wasn’t on their plan. So Jeff jumped online to buy seats behind the visitors bench at Amalie Arena, close enough to have a good view of the stool where the backup goaltender sits and far enough away where the family wouldn’t be a distraction. Kyle’s wife, Hannah, and her family also were in attendance.