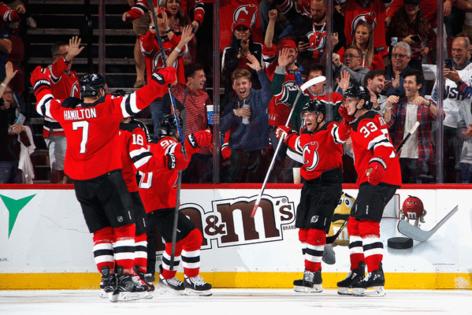 NEWARK, N.J. – Dougie Hamilton could not have drawn it up much better.

One loud introduction to his new team and fanbase.

The star defenseman scored 17 seconds into the season opener as the Devils beat the Chicago Blackhawks, 4-3, in overtime on Friday before a sellout crowd at Prudential Center. Andreas Johnsson added a goal and Jack Hughes scored twice, including the OT winner.

Goalie Jonathan Bernier stopped 24 of 27 shots in his first game as a Devil. Coach Lindy Ruff said starter Mackenzie Blackwood was unavailable due to lingering affects from offseason heel surgery. The Devils were without speedy winger Miles Wood (undisclosed) and second defense pair Damon Severson and Ty Smith, who are day-to-day with lower body injuries.

The largest Devils home crowd since February 2020 erupted less than a minute into the game when their free agent acquisition beat Blackhawks goalie Kevin Lankinen. Jesper Bratt forced a turnover with an aggressive pinch in the offensive zone and Pavel Zacha found Hamilton wide open in the high slot.

Hamilton's goal prompted a "Dougie" chant from the home crowd and surely a few No. 7 jersey sales in shops around the arena. It was a picture perfect start to a seven-year, $63 million deal that Hamilton signed with the Devils this offseason.

"He's top five in the league for sure," Hughes said on the opening day of training camp. "I think having him can take us to another step."

Per MSG, Hamilton set a franchise record for the fastest goal to start a season. The record was previously held by Zach Parise (26 seconds) from the 2006-07 season.

TAMPA, Fla. – The Blues were already in a run of games that wasn’t going to be easy. Two games with Tampa Bay, the two-time defending Stanley Cup champion, and then two games with Florida, which started Thursday with ...Read More

Erik Karlsson scored at the 39-second mark of overtime to give the Sharks a 2-1 victory over the host New York Islanders on Thursday.

Karlsson and Timo Meier went in on a 2-on-1 into the Islanders’ zone early into the ...Read More

After a two-game break, the ...Read More

The Panthers — also known these days as the “...Read More