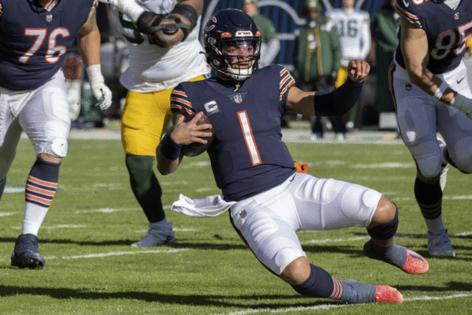 CHICAGO — Justin Fields and the Chicago Bears offense had a chance to break a nearly four-year losing streak to the Green Bay Packers on Sunday afternoon at Soldier Field.

Down by a point late in the fourth quarter, the Bears were marching downfield when Fields threw a pass toward Equanimeous St. Brown. Packers cornerback Jaire Alexander was there instead to make the interception at the 28-yard line.

The Packers takeaway followed by a touchdown and two-point conversion on the ensuing drive sealed their 28-19 comeback victory — their eighth straight win against the Bears, who last won a game in the rivalry on Dec. 16, 2018.

Packers kicker Mason Crosby made a 32-yard field goal with 4 minutes, 49 seconds to play to give the Packers a 20-19 lead.

Christian Watson ran for a 46-yard touchdown after Alexander’s interception, and Aaron Rodgers threw a two-point conversion pass to Marcedes Lewis for the final score.

Fields, who was making a return from a one-game absence because of a separated left shoulder, threw for a season-high 254 yards and ran for 71 yards and a touchdown. He threw a second interception to Keisean Nixon on a last-minute drive.

The Packers scored 18 unanswered points in the fourth quarter.

The Bears had a chance to respond, getting to the Packers 28-yard line on Fields’ 49-yard pass to N’Keal Harry. But the Bears lost 2 yards on a Fields pass to Montgomery, and Montgomery then ran for 7 and 1 yards on second and third down.

Santos made a 28-yard field goal for the first points of the second half to put the Bears up 19-10. The Bears got to the Packers 9-yard line on Darrynton Evans’ 21-yard run. But a Teven Jenkins holding penalty and a 5-yard loss on a Montgomery run pushed the Bears back, and they settled for Santos’ second field goal.