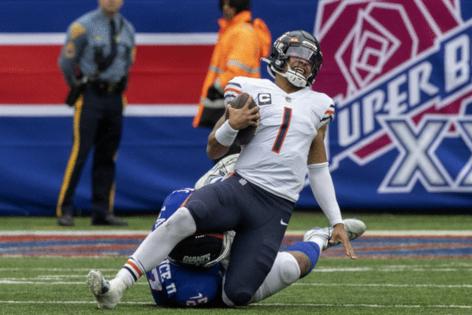 Only 8 seconds remained Sunday and the Bears were 67 yards from MetLife Stadium’s north end zone, the landmark for a potential last-gasp touchdown that could have maybe, possibly, by chance set up a game-tying 2-point conversion attempt. A whole ton of wildness had to happen to extend the game. But the Bears gave it a shot anyway on their final snap against the New York Giants.

“You’ve just got to hope for the best,” quarterback Justin Fields said, “and keep the ball alive.”

•St. Brown ran to the Bears 45 and, an instant before being hit by Adoree’ Jackson, threw a fastball across the field that bounced once, caromed off linebacker Micah McFadden’s thigh and somehow skittered back to Fields at the 40.

•Fields ran forward for 9 yards, then bombed a backward pass to St. Brown, who again burst ahead before throwing a wild pitch back to Ebner, who …

You know what? Let’s just summarize things here. During a madcap 43-second sequence, five Bears players touched the football, including offensive linemen Lucas Patrick and Teven Jenkins; Fields and Ebner each had it three times; and the chaos ultimately ended 5 yards behind the line of scrimmage when Giants safety Dane Belton dived on one last wild pitch.

That’s how Sunday’s “False Hope Bowl” ended with the depleted Giants surviving for a 20-12 victory that moved them to 3-1. For the Bears, that final play served as an appropriate snapshot of the entire afternoon, starting with the desperation continuing with all that helter-skelter action and culminating, of course, with a fate-sealing turnover.