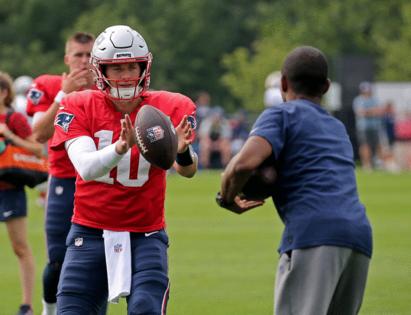 But after the Patriots’ second joint practice session against the Panthers on Wednesday, Jones appears to have hit the final stage.

After going through denial, anger, bargaining and depression with all the trials and tribulations of trying to adapt to a new offense — not to mention a new set of coaches handling both him and the offense — he’s on to acceptance.

Let’s just say Jones has come a long way from flinging his helmet, and then bolting from a bad practice moments after it ended.

He’s come to terms with it. And as Jones said last week, he’s determined to make it work.

Three weeks into training camp, Jones really doesn’t have much of a choice. Making the change seems inevitable.

While Jones had a good handle on the previous offense, one that highlighted his strengths, the Kyle Shanahan-style offense, which is where the Patriots are headed, can also allow quarterbacks to thrive.

That’s assuming, of course, that the staff knows how to teach it, and the players are able to adapt.