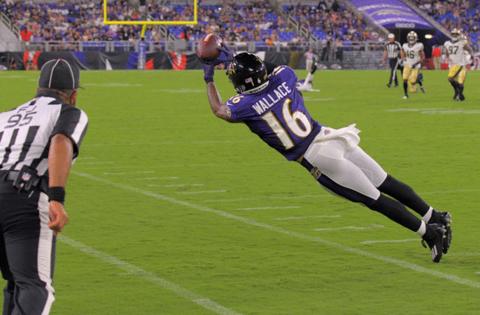 BALTIMORE — After the trade that returned the Ravens’ wide receiver group to that oh-so-familiar offseason zone — more potential than production, more questions than answers — Eric DeCosta couldn’t resist a joke. The Ravens general manager had just traded Marquise “Hollywood” Brown for the first-round pick that became center Tyler Linderbaum. He was asked: Did the deal leave the team thin at wide receiver?

“I was thinking about that, and I kind of missed all the questions this year,” DeCosta said last month. “I was thinking, ‘I kind of want to get back to the days of old,’ you know?”

In the three weeks since, the Ravens haven’t done anything at wide receiver but sign a handful of undrafted free agents and tout their young group. DeCosta said the team expects a “big, big jump this year” from 2021 first-round pick Rashod Bateman. He called Devin Duvernay a “great young player.” There was praise for James Proche II and Tylan Wallace. There were reminders that the team already has All-Pro tight end Mark Andrews.

The wait for immediate help, however, goes on. Former Cleveland Browns standout Jarvis Landry, who’d been linked to the Ravens in free agency, on Friday signed a one-year deal with the New Orleans Saints worth up to $6 million. The few impact wide receivers who remain have red flags: lingering injuries, durability concerns, diminished production. The Ravens, with limited salary cap space, continue to look for the right player at the right price.

“We like our receivers, we do,” DeCosta said after the draft. “We’ve seen growth, we’ve seen our guys mature and develop. ... We will add players to the mix. We’re doing that right now, and we’ll look at veteran players as well. It wasn’t really by design that we wanted to create a hole on the team. I don’t look at it that way, but in this business, you pivot, you dodge, you weave — you’re always really going to be chasing a need. Every team in the league would tell you that you’re chasing needs.”

In early February, long before the Ravens signed right tackle Morgan Moses, traded away Brown and drafted Linderbaum, DeCosta made clear the offense’s identity. “We’re a running team,” he said at his season-ending news conference.

Not like anything’s changed there. The Ravens led the NFL in carries in Greg Roman’s first two years as offensive coordinator; last season, weakened by a poor defense as well as injuries to quarterback Lamar Jackson, they finished third. The team’s run-first philosophy trickles down to its receivers. Coaches value strong run blockers, not only in the trenches but also out wide.

“Everyone wants to win, but most people want to win on their own terms,” Harbaugh said near the end of the Ravens’ breakthrough 2018 season, when targets were scarce for top wide receivers John Brown, Willie Snead IV and Michael Crabtree. “These guys have put away their own terms a little bit — a lot, probably. They’re blocking. Hey, we’re motioning across and cutting off back-side defensive ends with our wide receivers, and those guys are doing it. That’s a tough duty, but they’ve embraced it.”