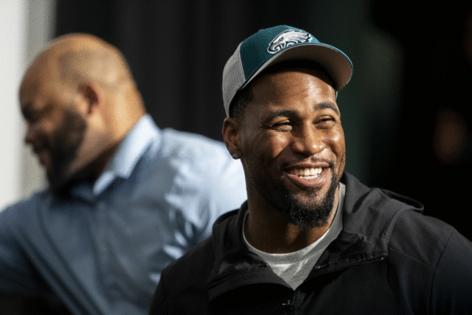 PHILADELPHIA — Sitting in the passenger seat of his mother’s car parked outside his college apartment, Haason Reddick told her he was ready to give up on a dream.

Early in his time as a Temple walk-on struggling to get on the field, Reddick was running out of patience. He had plenty of support, chiefly from his parents, but the Camden, N.J., native had yet to make meaningful progress on the depth chart.

Raelakia Reddick’s Ford Focus was stocked with groceries she had brought for him, and he reflected on the sacrifices she was making for him to pursue a college football career. Between the student loans and the grocery runs to save whatever she could over the school’s meal-plan costs, Haason couldn’t bear it.

“I thought it was a failed dream,” the new Eagles edge rusher told The Philadelphia Inquirer. “I thought I was doing it for no reason. Being a walk-on, I just remember telling her, ‘I’m ready to come home, Ma. I think I’m wasting my time here.’ ... It wasn’t looking good, so I was like, ‘If I’m not getting the opportunity to play, why should you continue to put yourself in debt?’”

Raelakia’s response was simple, but it put her son back on the path that would lead him to become a first-round pick in 2017 and an Eagle this offseason when he signed a three-year, $45 million contract as a free agent in March.

“My whole thing was, you finish what you start,” she said. “ ‘We’re here. We’re not going backwards. We’re not turning around. What is the other option? There isn’t one. We’re finishing what we start, you’re going to graduate college. Whatever happens with football happens, but you will have your degree and you will do something that you love.’”

Reddick, 27, is now situated as the Eagles’ top edge rusher going into next season. He has had double-digit sacks in each of the last two seasons with Arizona and Carolina and will be tasked with improving a defensive front that ranked 31st in sack production last season.

A handful of days before the news was official, Raelakia’s ears perked up when her son told her she should start looking at houses in Jersey.

“I knew it!” she responded when he finally called her with the news.