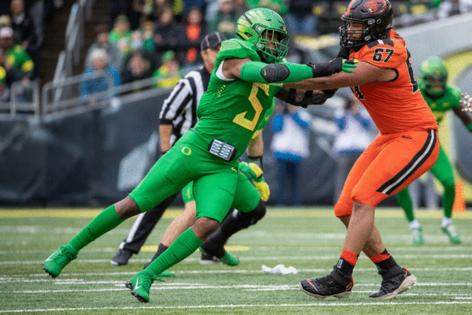 Draft season has arrived for the 18 NFL teams who will not be participating in the postseason and another college football campaign is in the books after Georgia earned its first national championship since 1980.

Players with remaining eligibility have until January 17 to make their draft intentions official.

After that, we have the college all-star games (most notably the Senior Bowl), the NFL combine, NFL free agency, college pro days and medical evaluations before we kickoff the draft in Las Vegas on April 28.

Part of my weekly mock preamble explains it is an attempt at figuring out the best players available in this season’s draft class, and which teams they’d match up well with considering the draft order courtesy of NFL.com. The closer we get to draft day, the more I attempt to match what teams will actually do with their draft picks as opposed to what I believe they should do.

Last season, I was the fourth most accurate NFL draft prognosticator in print according to The Huddle Report. I’m tied for seventh overall (out of 133) over the past five years.

The NFL draft has become a nice appetizer before our main course in September. A mock version of said draft is meant to educate, and even entertain. At very least, it helps you pass the time.

Here’s an updated version of my 2022 NFL mock draft:

LOS ANGELES — If the Rams defeat the San Francisco 49ers on Sunday in the NFC championship game at SoFi Stadium, it will become another important date of celebration in Rams history.

But Jan. 30 already has significance...Read More

LOS ANGELES — He's the ultimate plug-in hybrid, a player so versatile and dynamic, so explosive and electric, that he can't be defined by traditional NFL labels and roles.

TAMPA, Fla. — During the season, offensive coordinator Byron Leftwich can be found in his office several hours before dawn, breaking down video of the Bucs’ next opponent as if it’s the Zapruder film.

They are hiring Buffalo offensive coordinator Brian Daboll to be their next head coach, according to sources, teaming him with recently hired GM Joe Schoen, the Bills’ ...Read More

PITTSBURGH — Steelers president Art Rooney II said general manager Kevin Colbert, who has been with the franchise since 2000 and helped build the foundation for two Super Bowl titles, will step down after the 2022 draft....Read More