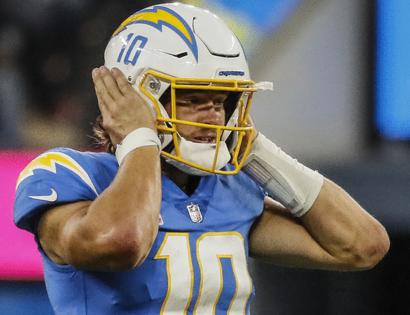 True, it was but one game (the other loss, to Dallas, in which they had two TDs called back, was a win gone bad). However this time, the Judases, aka L.A. Lodgers, went to Baltimore and were frightened into submission, totally Edgar Allan Poed.

They scored six points. Again, I never tire of bending the Smokey Gaines quote: "Six more than a dead man."

After that pathetic performance, it became obvious the J's are not going to the Super Bowl, they will have trouble winning a division not as strong as so many thought, and may even need help from a team of sherpas to climb to the playoffs.

At least in their present form.

They have to get a whole lot better in the butcher shop, the meat department, up front — on the offensive line/defensive front seven — where games are won, and, six games into the season, it's a bit late to correct.

With the trade deadline coming up Nov. 2, Mean Joe Greene and Anthony Muñoz aren't walking through the door.

The O line had promise thanks to free agency, but right guard Oday Aboushi is out for the year and right tackle Bryan Bulaga is just out, as usual, and may be back for the holidays. Their replacements aren't as good, which is why they aren't starters.

Left tackle Rashawn Slater is one of the best players from the April draft, a Rookie of the Year candidate. And free agent All-Pro center Corey Linsley plays the part.

The front seven never figured to be the Steel Curtain, but injuries to tackle Daniel Jones and inside linebackers Kenneth Murray Jr. and Drue Tranquil have weakened the weak. The Browns exposed them on the ground, and the Ravens followed.