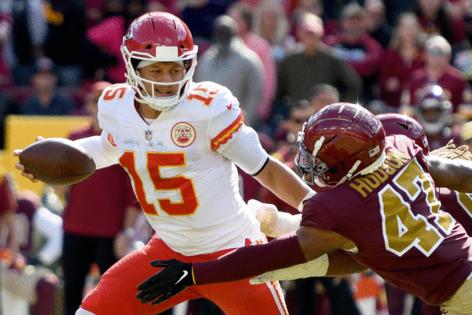 The can talk about how winning games in the NFL is hard, and they won’t be wrong. They can talk about the offensive line playing well and cutting turnovers in the second half and, all things considered, the defense’s best performance of the season after some interesting tweaks to the lineup (most notably Juan Thornhill for Daniel Sorensen) and play calls (most notably some pressure generated by more blitzes).

That will all be true. The Chiefs beat Washington 31-13 on Sunday, and it still feels weird to be critical after wins. The Chiefs closed strong, and deserve credit for that. But most of the performance left as many questions as answers.

The Chiefs have earned these high expectations, and while they stopped the slide of the last month they did not give fans reason to believe the problems are fixed.

Patrick Mahomes is often the first one praised, so let him be the first one called out here: the two worst interceptions of his career are in the last four games, including a haymaker of a terrible idea poorly executed just before halftime against Washington, and this is a curious look for the man who has vowed to make better decisions.

“We had to dig down deep, and guys did that in the second half,” Mahomes said in the post-game TV interview. “... I had that dumb interception ... and guys said, ‘You keep being you. Keep believing.’”

Before we go further, let’s at least acknowledge some positives before the final score:

The offensive line played well. The Chiefs produced some pressure despite Chris Jones missing another game with a wrist injury. Mike Remmers started for Lucas Niang at right tackle and did well. Same with Thornhill taking over the free safety from Sorensen. Darrel Williams ran hard, and scored two touchdowns.

So, the Chiefs can cobble together some lipstick on this thing but when they break it down to the studs they’re going to know that too many of the same old problems still apply.

On offense, three more turnovers show tey are far too careless with the ball, and now that we’re more than one-third of the way through the season we are well beyond the point where this is an aberration and not this group’s consistent behavior.