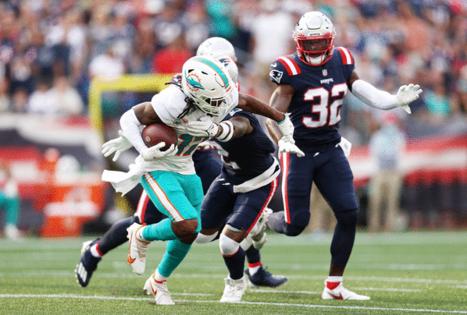 The cheeky ease with which the kid started — in a place that’s haunted the Miami Dolphins — matters in a good way. Everyone knew Jaylen Waddle was fast. Was anyone sure he’d be this quicksilver fast in turning NFL heads?

Everyone knows time is the big test. But there’s a special place for the rookies who don’t need a process or patented patience to announce their arrival.

“It’s great,’’ Waddle said of his day, with a go-to word he kept going to. “Every win is going to be great. But first one in a big game, it was a great atmosphere and playing against guys you know on the other side, so it was great.”

Bill Parcells’ Dolphins era wasn’t as great as the lines he left. One was how, “puppies bite or they never will.” There has been so few puppies biting in this Dolphins rebuild, this was something to watch.

Cornerback Noah Igbinoghene, the 30th pick in 2020, wasn’t activated for what was to be a big-step-forward second season. He’s 21. Sure, there’s time. But after not playing much his first year, this wasn’t he way to start the second.

Everyone misses. That’s the rule of the draft. The bigger question is who General Manager Chris Grier hits on. That will tell where this rebuild goes, since most of the heavy lifting is done.

There hasn’t been another rookie who came out of the gates from practice to preseason to the career opener like Waddle in the past three years.

Raekwon Davis, a second-round pick, began to emerge in the latter half of his first season, an impressively fast track for a defensive tackle.

Quarterback Tua Tagovailoa’s first start in Arizona last year remains his best start. We’re 10 starts in for Tagovailoa, too, including a lackluster day in New England where he was outplayed by his Alabama understudy, the Patriots’ rookie Mac Jones. There’s time. There are questions, too.