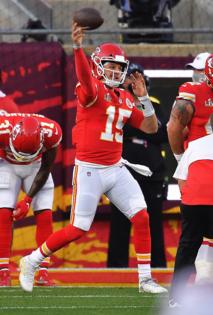 The Chiefs are scheduled to play five prime-time games in 2021, they unveiled during the NFL schedule release Wednesday evening — though just two of those will be played under the lights at Arrowhead Stadium.

But first they’ll open the season at home with a 3:25 p.m. afternoon kickoff against the Browns on Sunday, Sept. 12, a rematch of the AFC Divisional Round last January.

Tickets for the Chiefs 2021 regular-season games will go on sale Thursday and can be purchased on the team website. Jackson County taxpayers will have the first crack from 8-10 a.m. Thursday. After the pandemic limited capacity to 22% in 2020, the Chiefs are selling tickets under a full-capacity Arrowhead Stadium.

The first prime-time game arrives quickly. The Chiefs travel to Baltimore in Week 2 for Sunday Night Football, on which they will make three appearances this season. The first home night game is a Week 5 date against the Bills in an AFC Championship Game rematch. The two teams will meet Oct. 10 on Sunday Night Football.

The Chiefs will also host the Giants in a Week 8 Monday night game on Nov. 1. And two of their three divisional road games will earn a prime-time spot — a trip to Las Vegas on Nov. 14 (Week 10) is slated for Sunday Night Football, and a date with the Chargers (Week 15) on Dec. 16 slots in for Thursday night.

The Chiefs’ bye week falls in Week 12, the week of Thanksgiving.

The Chiefs are the Vegas favorite to win the AFC, but they play the next three teams on that sheet — the Bills, Ravens and Browns — this season.

And they have a pretty attractive meeting with an NFC team, to boot. It’s Patrick Mahomes and Aaron Rodgers — for now — on Nov. 7 (Week 9) at Arrowhead Stadium. When the NFL voted to add a 17th regular season game in 2021, the Packers jumped on the Chiefs’ schedule. Provided Rodgers remains a Packer — he’s been the subject of trade speculation — the matchup would pit the two odds-on favorites to win the NFL MVP award. Mahomes is listed at 5-to-1, with Rodgers at 9-to-1. Rodgers won the award last season.

With the addition of the 17th game, the NFL schedule stretches to 18 weeks and concludes one week later in January. The Chiefs finish in Denver in Week 18 on Jan. 9.