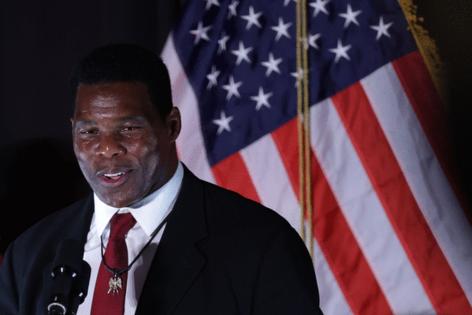 Believe it or not, Herschel Walker is the star of some of my favorite childhood memories. I remember him soaring, wingless, over piles of opposing teams’ players while we watched UGA football games on our family TV.

I can still hear the firecrackers our neighbors, the Pullins, set off on the night Georgia won the Sugar Bowl in 1981. And I may still have the special edition Coke bottle my mom bought me at the A&P on Northside Parkway, which listed the names of all of the players on the national championship team, including #34.

The point of all of this is that Walker was a hero to many who grew up in Georgia before he ever entered the race for Senate, even for a girl like me who liked horses more than football, but just barely.

But for as much of a hero as he was as an athlete, the campaign that Herschel Walker has run for United States Senate has been the near-opposite of heroic, beneath the memories that many Georgians have of him, and beneath the voters he says he wants to represent.

Among the many problems with his campaign is the fact that Walker has done the most limited of interviews outside of friendly media. While Brian Kemp, David Perdue, Raphael Warnock and U.S. Rep. Marjorie Taylor Greene spoke freely and repeatedly to the press, including The Atlanta Journal-Constitution, Walker has been a closed-off outlier.

I told a Walker staffer long ago that would mean his point of view would never be reflected in my column or our coverage.The staffer agreed but was powerless to arrange an interview the candidate wouldn’t give.

More importantly for voters, this means Walker has only rarely been pressed on questions Georgians might have for him, including on many issues he’d be voting on as a United States senator.

We still don’t know where Walker stands on funding the war in Ukraine, for example, or potential cuts to Medicare and Social Security, nor which regulations he’d cut in his promise to reduce government red tape.

Which committees would he want to serve on? Who would advise him? Who knows?

If you think you’d get those answers by going to a Walker campaign rally, think again. Walker’s stump speeches are heavy on slogans and heroic biography — and almost totally devoid of policy proposals.

“God has brought that warrior, and I’m that warrior that y’all have been looking for,” he likes to say. “I’m going to take y’all to the promised land.”

Walker tells his audiences about getting a scholarship to college and making the Olympic bobsled team. He calls them his family and swears to protect them. He warns them about transgender kids playing sports and asks if they’d want their daughters competing against him. “No!” comes the answer.

He can be charming and engaging in his stump speeches, but sometimes seems agitated and troubled, too. It’s difficult to know where his idiosyncrasies end and total nonsense begins.

The result has been what you’ve likely seen on TV or online — Walker comparing Warnock to Scooby-Doo, his environmental theory about “China’s bad air,” a recent aside about Archie Bunker, and an extended dialogue about werewolves vs. vampires, which a colleague told me he was asked about on a recent trip to Scotland.

“I don’t know if you know, but vampires are some cool people, are they not?” Walker said during a speech in McDonough. “But let me tell you something that I found out: a werewolf can kill a vampire. Did you know that? I never knew that.”

What any of that has to do with the United States Senate is completely unclear.

Along with not talking to the AJC, it’s been nearly two months since Walker has held a press conference and nearly as long since he’s spoken to any outlet outside of the conservative ecosystem. Lately, his staff has imposed a rule that reporters cannot get within 20 feet of the candidate.

That’s kept him protected from both the easy questions he might have been asked and the hard ones, especially about his troubled personal background. That includes the “atrocities” he’s been accused of by his son Christian, the three other children he never discussed before the campaign, the two abortions separate women said he paid for, which he denies, and accusations of abuse from a different ex-girlfriend.

While we’re on the subject of transparency, Sen. Warnock has been easily accessible to voters and the media during this campaign, but not always transparent.

His own divorce and custody proceedings are sealed, largely because of his children’s young ages. While that’s logical, it’s also kept reporters and voters in the dark about the circumstances behind his divorce.

The senator also tucked his housing allowance from Ebenezer Baptist Church into his Senate disclosure form without fanfare. The value of the allowance would have kicked his income over the limit for a senator’s outside income. Whether that’s important to voters is now up to them, since Warnock reported it publicly as required.

But we’re comparing apples to bulldozers at this point.

Warnock and Walker have run very different campaigns. That Walker has run such a mess of an operation and nearly tied Warnock on Election Day speaks to the continuing affection for Walker in Georgia and the strength of Gov. Brian Kemp, who won reelection by an eight-point margin last month.

Whether Walker can win the runoff without Kemp on the ballot is another question altogether. If he’s lucky, voters will treat him like the hero he used to be, not the candidate he’s become.