The Yahoos of Kenosha 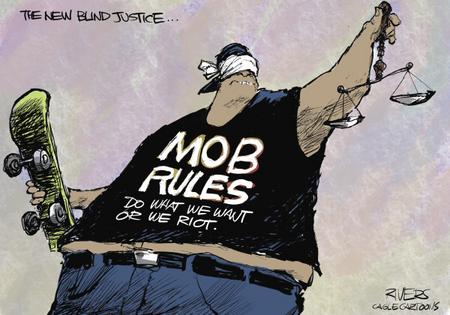 On Thursday afternoon, as the country was still awaiting the decision on the Kyle Rittenhouse murder trial, the yahoos outside the courthouse in Kenosha were ready to riot.

Guilty, not guilty, hung jury or mistrial – it won't matter to them what the verdict will be on the homicide charges against Rittenhouse.

The yahoos are going to make trouble in the streets whether they are enraged by the jury’s decision or pleased by it.

They’ve been taking photos of the jurors and threatening them to vote the “right” way – which means not acquitting Rittenhouse on grounds of self-defense. They’ve also been sending death threats to the judge.

The 500 members of Wisconsin’s National Guard that have been called in to handle the expected post-verdict violence will probably keep the yahoos from burning down what’s left of Kenosha.

But as we know, the National Guard has arrived a year and a half too late. The city of 100,000 will probably never recover.

Kenosha's fate is to live on as the symbol of what happens to a town when spineless politicians and the deplorable liberal media allow, encourage and justify violent and destructive protests in the name of social justice.

The trial of Kyle Rittenhouse is the latest proof of how hopelessly the country is split between Republicans and Democrats on almost every issue.

Did you and your family celebrate the fall of the Berlin Wall on Tuesday?

Didn’t think so, but it’s not necessarily your fault.

“The Fall of the Wall” was a geopolitical ...Read More

Well, what do you know.

He shut the hell up, encouraged his supporters to flood the polls and stayed away from Virginia.

By keeping his ...Read More

The phonies who write the laws in Sacramento have no idea how hard it is to run a small business successfully. And they don’t care.

When they pay you not to work, you take a vacation....Read More

The phonies who write the laws in Sacramento have no idea how hard it is to run a small business successfully. And they don’t care.

When they pay you not to work, you take a vacation....Read More

I know in my heart that man is good, that what is right will always eventually triumph, and there is purpose and worth to each and every life.

Those words written by my father, which ...Read More

It’s not until you leave the United States that you realize how angry Americans are.

Earlier this month my wife the travel agent and I took a cruise in the Mediterranean from Athens ...Read More