Will Jill Save Us From Old Joe? 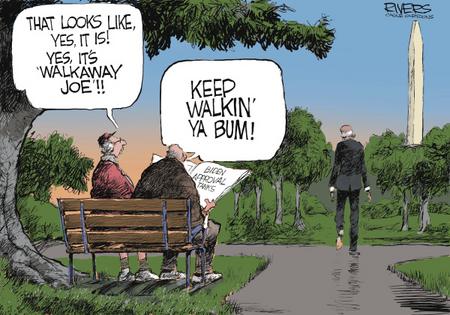 Does anyone on the planet really still believe Joe Biden has the mental faculties to be president?

Anyone in Congress? Anyone in the media? Seriously.

It’s time for Democrats and Republicans to be honest. Skip the partisanship.

It’s not about the series of major domestic and foreign train wrecks Joe Biden has engineered in just eight months – the immigration crisis at the Southern border, the demolition of our energy independence, the botched, tragic and humiliating exit from Afghanistan.

It’s about a sitting American president who proves every day that he doesn’t have the mental chops – or the physical stamina – to be in charge of the most powerful and most important country on Earth.

Watching Biden stumble through the motions of being president makes you understand why his keepers hide him in his basement from the media.

Anyone who watched his mini-press conference in the Oval Office with Boris Johnson this week couldn’t help but be embarrassed for Biden and the country.

It was a pathetic sight to see Boris commandeer the “presser” and screw up the plans of Biden’s handlers – Biden’s controllers, really.

Boris took two questions – from foreign reporters, not American ones.

Then, when it became apparent that White House reporters were going to start peppering Biden with questions he hadn’t been prepped for, the president’s staff cut them off and started shrieking at the media to clear the room like it was on fire.

But this kind of clumsy, protect-the-demented-president strategy doesn’t make me mad at Old Joe. It makes me sad. I feel sorry for him.

It’s one thing for the White House staff and liberal media to pretend all is right with Joe Biden’s brain. They all voted for him in 2020 and will protect him as long as they can.

But where is first lady Jill Biden? Where are the president's brothers and family members?

They know better than anyone how far Old Joe has declined, but they apparently care more about the perks of keeping a Biden in the Oval Office.

Who I’m most pissed off at is his wife, Jill Biden, who apparently wanted to be first lady more than she wanted to be a good “doctor” and do what’s best for her own husband.

Ditto for the selfishness of Biden’s political staff. Apparently, it’s more important for them to keep calling the shots in the White House than it is to do the right thing for a man who clearly has dementia.

I get it. I enjoyed being the son of a president. It was pretty cool – sometimes – to be protected 24/7 by Secret Service agents.

But my God, my father’s health was always a heck of a lot more important to me than taking trips in Air Force One or having access to the Oval Office.

The whole Biden dementia thing has become so horrific you can’t make fun of it anymore. It’s not funny, especially to me.

I watched my father suffer from Alzheimer’s Disease.

But when my dad was really showing the effects of dementia in the early 1990s, Nancy Reagan didn’t let him deteriorate in front of everyone.

Say what you will about her steely persona, but Nancy took her husband out of his office in Century City, brought him home and took proper – and loving -- care of him for the rest of his life.

For the good of her husband – and the country – Jill Biden should do the same thing.

Michael Reagan, the son of President Ronald Reagan, is an author, speaker and president of the Reagan Legacy Foundation. Send comments to reagan@caglecartoons.com and follow @reaganworld on Twitter.

It was silly, but I was really hoping 2022 would be different.

A new year. A fresh start for America.

And an end – or at least a brief armistice – to the nasty political civil war that has tortured us for the ...Read More

It’s New Year’s again and time to hope for a happier future.

Last year at this time we were hoping for a better year in 2021, but that sure as heck didn’t work out, did it?

It’s New Year’s again and time to hope for a happier future.

Last year at this time we were hoping for a better year in 2021, but that sure as heck didn’t work out, did it?

I’m sick and tired of hearing the dire warnings and broken promises of politicians and incompetent ...Read More