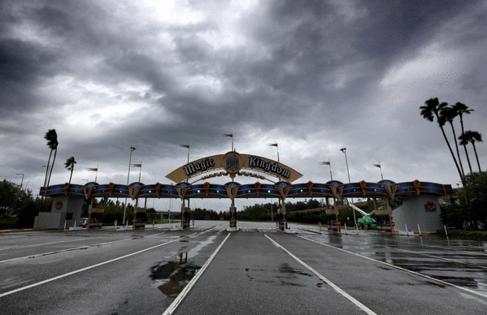 Shortly after Disney’s announcement, Universal Orlando said it would close its theme parks and CityWalk entertainment district Wednesday evening due to the storm.

SeaWorld followed soon after, saying it would also close Wednesday afternoon and remain shuttered until Friday.

Disney’s theme parks were set to close at 5 p.m. Wednesday and remain shut down through Thursday morning, the resort said in an update just before noon. The parks will “likely not reopen” at their scheduled times Thursday morning, according to a post on the resort’s inclement weather site.

Disney’s Animal Kingdom was closing at 5 p.m. Wednesday, Disney’s Hollywood Studios at 6 p.m. and Magic Kingdom and Epcot at 7 p.m.

The resort also closed its Fort Wilderness Resort & Campground and the Treehouse Villas at Disney’s Saratoga Springs Resort Wednesday afternoon and required all guests to leave by 3 p.m. Disney representatives are contacting guests with reservations at these resorts to find them lodging elsewhere.

Disney’s Galactic Starcruiser hotel will also be canceling its scheduled “voyage” on Thursday and the hotel is contacting guests with existing reservations.

No other hotels are affected by closures so far. Resort hotels with character breakfasts will not include costumed characters Thursday morning so the hotels can accommodate additional guests for breakfast, the update said.

The resort is honoring existing dining reservations for Wednesday evening at Disney’s theme parks through various times, depending on the closing time for each individual park. Further reservation details are available at disneyworld.com/weather.

Disney Springs also was closing at 7 p.m. Wednesday and will similarly stay closed through Thursday morning. Resort bus transportation from the shopping district was set to run until 8 p.m. Wednesday.