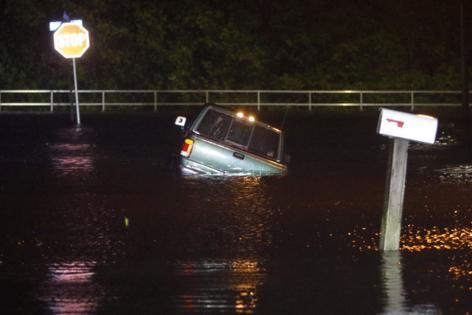 MIAMI — As every Floridian knows, June 1 is the official start of the Atlantic hurricane season. But it unofficially starts on Sunday at the National Hurricane Center in Miami.

For the second year in a row, forecasters will start sending out formal tropical weather outlook two weeks ahead of the official start of the six-month season. It’s not just for practice. A named storm has formed before June the last seven years in a row — a pattern scientists have attributed to better monitoring technology and possibly the influence of climate change.;

And with early forecasts already calling for another active hurricane season, chances are good the storm watchers will once again find something to track.

There’s a growing chorus of scientists who say that moving the season up or even expanding it makes sense, as climate change heats the planet and makes it easier for storms to form earlier and later in the year.

The NHC is not there — at least not yet.

“If we started May 15 it might capture an additional maybe 1% of storms, but it’s more complicated than that,” said Ken Graham, director of the NHC.

Graham assembled a team of scientists last year to explore the possibility of changing the official dates of hurricane season. They haven’t completed their work yet, and once they do it will have to be presented to the World Meteorological Organization, which will vote on it. It might be a tough sell, since the WMO is made up of 28 countries, many of whom don’t experience the early storms.

“We’re not opposed to it, but you can’t just do it. There’s a lot of other stuff from the social science perspective that has to be considered,” Graham said.

For one, moving the storm season earlier would bump all the pre-season training and conferences into tornado season. It also edges all the coordinated government campaigns about hurricane preparedness two weeks further from the peak of the season in August and September.

And many meteorologists question why the season should expand to include so-called “junk storms,” small, weak storms that might not even have been noticed with older satellite technology. Some of these storms can still cause coastal flooding and rainstorms, but they’re usually far weaker than their later season cousins.

There is little doubt that climate change will also change hurricane. The science remains a bit murky but scientists are confident in a few impacts: sea level rise will likely lead to higher storm surge, storms of the future will likely be slower and wetter, and although climate change may lead to fewer storms overall, the ones that do form are likely to be powerful.

NOAA will issue its first forecast of the season May 24.

MIAMI — Over the last 40 years, North American cars and power plants have gotten cleaner. They spewed far less pollution into the atmosphere, a difference visible by satellites.

But a new paper from NOAA published ...Read More

ORLANDO, Fla. — It may only be Mother’s Day and not yet hurricane season, but the National Hurricane Center is tracking the first tropical wave of 2022.

ORLANDO, Fla. — The name Ida will never again be used to label a hurricane.

“Ida” was retired Wednesday from the list of tropical storm names during the World Meteorological Organization’s annual hurricane ...Read More

LOS ANGELES — The late-season burst of snow and moisture that blanketed Northern California in April helped make a small dent in drought conditions, experts said, but the majority of the state is still far below where it...Read More

SAN JOSE, Calif. — After the driest January, February and March in Northern California’s recorded history back to 1849, rains this past week finally brought some relief — and real benefits — across the Bay Area and...Read More