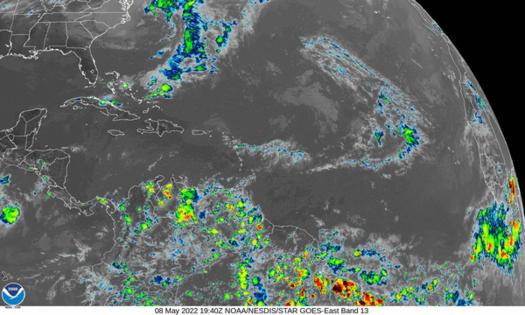 ORLANDO, Fla. — It may only be Mother’s Day and not yet hurricane season, but the National Hurricane Center is tracking the first tropical wave of 2022.

In its Sunday morning tropical update, forecasters said the first tropical wave of the season was emerging off the west coast of Africa.

“Currently, clusters of moderate to strong convection are noted over parts of Guinea, Sierra Leone and Liberia,” the NHC said.

The hurricane center expects the wave to continue moving off the coast and into the Atlantic.

“Tropical wave guidance has it moving westward over the next 24-48 hours, crossing just (south) of the Cabo Verde Islands,” the update said.

Hurricane season officially starts on June 1, but in the past seven years there have been named storms in May — including Anna last year and Arthur and Bertha in 2020.

The first named storm of the 2022 season will be called Alex.

The 2022 hurricane season is expected to be a busy one, according to the meteorological team at Colorado State University. Its forecast released in April called for an above-average year with 19 named storms this season — five more than what the National Oceanic and Atmospheric Administration considers average, based on data collected from 1991 to 2020.

The Colorado State prediction also calls for four major hurricanes, which are defined as being at least Category 3 with maximum sustained winds greater than 110 mph. The average season has about three, according to NOAA.